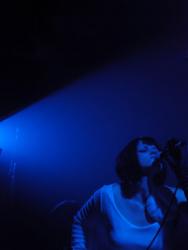 Bre Loughlin's {lead singer/siren of Kuma} costuming* always proves to be as exhilarating as her voice. Tonight's show was no exception. On stage, Bre looked devastating, controlled, doll-like, strong, mesmerized and mesmerizing all at once. Oh, and the people in the audience that talk while Kuma is on stage? You all should be charged a very hefty fine.

I talked with Bre pre-show and she admitted she gets nervous before every set. While she was on stage, I saw nothing but confidence and a natural born performer. At the beginning of their third song, two beams of light shot out diagonally from the back of the stage. Bre {still facing the back of the stage} leaned backwards as if the light beams were a limbo pole. It was visually gorgeous. Her voice spanned from childhood girlieness to a womanly growl all the while maintaining a sexy sweetness that had the crowd twitter-patted.

The instrumentation was provided by the men in black: Corey Paganucci, Dave Dayton, and Neal Hallmark. Cory was neck deep onstage with keyboards, synthesizers, processors, petals, cords and an Apple PowerBook {drool, drool}. I even think he had an ATM machine back there. Neal and Dave added extra effects and atmospheric sweetness with their guitars.

*For this performance, Bre donned knee-high black boots, fishnets, a white asymmetrical bubble dress, a thick black belt and tall black gloves fit for a prom. And, since I saw her last, she had gotten about two feet of hair cut off into a sassy geometric do.

At times there looked like there were strings attached to Bre {like a puppet} and she faltered as the strings were given slack, but jumped into a very doll-like and precise position when the imaginary strings were suddenly manipulated. There wasn't stage banter. There didn't need to be any. After the last song some guy in the audience pleaded, "No, don't stop."

Kuma provides trip hop that occasionally rocks and a live performance that won't make you dance, but will curb you from blinking the entire time they're on stage. So, break out the Visine and get your cute little fanny to a Kuma show.