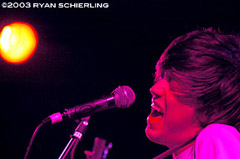 From the first moment I heard Okkervil River's 2nd album, Don't Fall in Love with Everyone You See, I was transfixed. They soothed my scarred heart with lyrics like "Don't call me or send me any more letters, baby. I just can't stand to see you hand writing things that you don't mean." and "She said 'I know it's easy to have me, but I have seen some things that I can't even tell to my family pictures,' and 'I'm full of fictions and fucking additions' and 'I miss my mother.'"

And you know me, once transfixation hits… um… I'm allowed to make up the word "transfixation," right?

So… you know me, once transfixationTM hits, research follows. My findings included hometown tidbits (Austin), and morsels recounting previous tour routes (never came to Seattle). From these facts I was able to deduce that there was a very slim 27% chance that I would ever see them live. Although I was not comfortable with this, I succumbed to it. Sometimes life just isn't fair.

Now imagine my utter delight when I heard that they were coming to the Crocodile, Three Imaginary Girls was granted the opportunity to sponsor the show and that I was going to be able to interview them! {Interview coming soon, hold your horses. I am but ONE Okkervil-River-giddy imaginary girl}. That kind of elation, my friends, is what the holidays are all about. It was like someone just gave me the Barbie Dream house, the motorhome AND the corvette!

The crowd was small, but had the feverous dedication of a Modest Mouse fanclub-only show. In particular, there were four superfans that came down from Canada.

And who can blame them? I doubt there was a tarnished soul in the house who, after seeing the sultry 4-piece, wouldn't travel across international borders to see them. Even the usually stoic Seattle-ites emphatically rocked, swayed and attempted to sing along with the intricacies lead singer Will Robinson Sheff spouted.

I can totally see why igLiz has been driven to alliteration at the mention of their name. There is that Conor Oberst heart-on-sleeve-ness, DecemberististicTM use of mandolin and accordion AND that Austin guitar strumming she is known to wholeheartedly endorse.

Upon seeing them live, I was able to firmly hone in on what they have created that no one else can. Their songs create an order in chaos… more explicitly, their songs unearth the hope present in desperation. That "I know this is for the best, but damn you{!} It hurts like hell right now." Like all of the aforementioned singer-songwriters, Will is able to make indefinable inconsolableness not only tangible, but repairable.

True. Honesty and earnestness saturated their songs. The proportion of whispers to wails was faultless. They perfected the epic-quiet with, "If you really want to love me, well then do it," and left the audience crumbled beneath their crashing crescendos. liz says All of this Will accomplished with a broken G-string on his guitar.

Yea, yea… all dirty jokes aside {ok, giggle}… it is true! Will played the second half of the set with no G-string!!!

We've all seen musicians freak out like babies over a broken string and, sometimes, even stop midsong just to fix it. It is a nitpicking travesty!

I admire that Okkervil River understand that the such preciseness is not necessarily detrimental… kind of like how it can ruin the flow of events when one stops a make-out session to fix their hair. A bit of unkemptness can intensify the moment. You know… I imagine.

And there was not a dry eye in the house when there was a full band-a capella-sing-along at the end of "Okkervil River Song." Who would have thought there could be a song on their setlist that could top "Red" ??

Finally, the igLiz indistinguishable descent into song by song comparison!

Ok, I won't do that… but I will leave you with this thought.

You've had people who were at the last Seattle Neutral Milk Hotel show at the Crocodile {back in 1998} and have randomly recounted how amazing it was. Ever since you've wished that you were there so that you could have heard the genius of Jeff Mangum live?

Well, you need to see Okkervil River the next time you have the opportunity so that you can recount your very own unadulterate-able experience. Oh – lucky for you! Rumor has it they are coming back early next year {Spring?}. Mark your 2004 calendars with one big "I am busy… Okkervil River might be in town tonight," buy all their albums and begin memorizing the lyric sheets.

Because, just like the perfect present, some things ARE just as flawless as you imagine them to be.