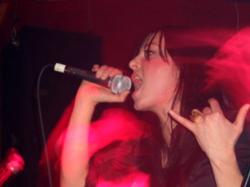 The instant the Fitness took the stage, I reverted back to my awkward teenage years. It was such a vivid memory, I could almost smell the Exclamation perfume in the air. Chop Suey changed from a Seattle club venue to my high school gymnasium. On stage were the cool kids, exemplifying my nerdiness. You know the type: they can move, they can sing; they're so confident that one look in the eye can make you instantaneously shrink. You can meet them inadvertently a dozen times, and they'll never recognize you — but you'll know who they are before they even shake your hand {if they aren't too cool to shake your hand}. They make smoking look good. They're not the homecoming court — they make fun of the homecoming court. Yet they seem to wear an invisible coolness crown that even the homecoming queen covets. The Fitness is way too cool for me.

Even though it was late, I was running on four hours of sleep, and was fully aware that I had to be alert enough to commute at 7 a.m. the next morning, I didn't check my watch once during their set. They were Fun with a capital "F"! Along with being extremely Fun, they also provided healthy doses of snotty and bratty and they made me want to shake my ass…ahem…excuse me, shake my *sweet* ass. Bree is in your face, telling you how it is, commanding you to dance with her microphone. Their performance solidified my decision to put them on my 2003 Top 10 list.

I finally understand their choice of the name "The Fitness". The members of that band get more exercise on stage then if they did an entire Jane Fonda video. I think that should be their shtick: The Fitness. We're more effective than the Subway diet.

After their set, I wanted to go introduce myself to them, but was too petrified to be fed alive to the cool crowd.

Maybe at our ten year reunion…?