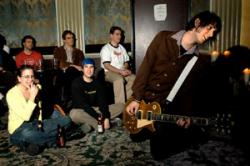 Yeah, yeah, we know we just reviewed The Capillaries in our last issue. But we saw them again, okay? So we're writing about them. Sue us.

Besides, it's worth your while to read about them again if for no other reason than we brought photographer extraordinnaire Ryan Schierling this time. We've posted the photos to prove it. In fact, you might as well ignore our words and the band and just look at the photos. That's what we'd do.

This particular night, the Capillaries played at the newly un-scary Rendevous, a classic Seattle establishment that just received a glamorizing face-lift. Interestingly enough, igLiz and I had never visited during either phase. While the bar is nice, it's the stage area that's nearly fascinating; it's intimate and cozy, and during the three opening acts (Jon Auer, Andrea Maxand, and Gavin Guss), we actually couldn't talk, because the space was so quiet we would have been interrupting the performers. And we weren't in a "sit-and-listen-respectfully" sort of mood. We wanted to rock!

Before The Capillaries came on, they handed out earplugs. Our problem was about to be solved.

The Capillaries played a driving set of power-pop numbers from their soon-to-be-released debut, Overnight Lows and Daylight Savings. In fact, the sign in front announced that this show was a CD release party. But none were made available to us. Hey boys — when's that CD coming out, anyways…?

While we heard a couple of interesting new tunes (the as-yet-unnamed opening number with its falsetto "I'm freaking out!" lyric being a notable one), we missed some of our favorites from the last show, namely: "Waterloo," "Sleeping You Off," and of course, "Don't Leave Me 'Til After Christmas." Pretty astonishing that we could recall the names of songs from one show when the band hasn't even released an album yet, doncha think? These guys are catchy. Of course, we said that in our last review…

Yeah, this show frankly wasn't as great as the last one we saw. Hell, they told us that themselves. But one of the self-professed great things about this band is that they have fun, even when they're not having their best show.

Towards the end of their set, Jon Auer (of Posies fame) joined them on stage. In fact, it was only fair trade, as Capillaries drummer Jon Foley had assisted Jon earlier in the night. With the on-stage camaraderie evident, the mutual admiration society was in full-force — and the whole of these musicians became greater than any of their respective parts as they beamed their way through a couple of great cover songs, including Matthew Sweet's "Sick of Myself" {have I shared my long-standing Matthew Sweet fascination with all of your before…? Well there you go, I guess I just did}.

Anyhow, there are our words about the show. Now did you see those kick-ass photos…?