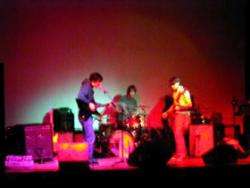 Goodbye to the Paradox Theater

By Alisha and Summer
{aka Honorary Imaginary All-Ages Correspondents}

{imaginary aside: The Paradox Theater recently closed the doors to it's location on the Ave. But are they closing? NO! They are not closing. They are relocating. If you have any further questions, or want to volunteer, they're provided a handy FAQ about their future on their web site.}

As Summer and I strolled into the final show at the Paradox, we saw this tall good-looking guy with awesome dark curly hair. Then guess who goes up on stage as the guitarist and lead singer for the first band, the Ben Kennedy's? Their sound was a very classic one — think early nineties indie rock, like the Lemonheads, or the Jon Auer side of the Posies. The set was full of interesting rhyming themes such as masturbation and mutilation — who would have thought? The singer's guitar also brought some unexpected amusement. Picture a crazy eighties black "KISS" guitar — yeah, it was interesting. They were good, in that wood-paneled station wagon kind of way.

Euclid was very good at what they do. It's true, I mean it. The thing is that this wasn't the right place for them. They played Christian/country/folk type dirges and had that typical female harmonizing vocals. We heard such sentiments from them as, "oh lord when you descend, please bring my family back home again," and "When we see the earth's demise, then we will see paradise." You get the idea. Basically, FOLK-LIFE FESTIVAL LOOK OUT!!!

After the whole Euclid experience I was a little wary, but my fears were dispelled when Dear Darling told the audience to stand up because they were a rock band, phew. They played passionate, soulful, indie rock, with the style and speed of their songs varying from one to the next.

Their lyrics and whole demeanor were very genuine, as was their banter. The lead singer told a slightly disturbing story of how his mom cooked their pet goat in the form of taquitos for the band and Damian Jurado, but only after they'd finished eating did she tell them what they'd eaten. Creepy.

Anyways, I liked them, but I became worried, not due to the music, not at all, but because my good buddy (and photographer) Summer was nowhere to be found. I was concerned for you, the inquiring reader, for you wouldn't be able to see the adorableness that is Dear Darling. Fortunately after the show, guilt led Summer to ask the very cute drummer if she could get a shot of the band. This is why Dear Darling ended up with the best pictures (Summer, you're more than forgiven). They were super nice guys — I felt like giving them hugs when we left, but I refrained.

I forgot how much I love these guys. They give you this nice, warm, familiar feeling. Their songs are so great and unlike anything else around. If you haven't had the pleasure of hearing The Prom I'd describe their music as amazing keyboard/piano driven indie pop. Their songs are brilliantly constructed, simple at times, complex at others. James' voice and lyrics are a wonderful example of what lyrics and vocals should be. The music is pop without all those awful things that go along with pop music.

But back to the show. Their set was short (that's my greedy opinion) but definitely awesome. We got to see the two new Prom members who seemed to fit right in. The band played a couple new songs right at the end. The first new song sounded like The Prom lost in a high action video game, it was so rad. It had this full, solid sound that just captivated you and made you almost unconscious of the fact that there weren't any vocals. The last song was amazing. Towards the end James kept repeating, "I can't keep moving" and I was enthralled. The song slowly crumbled then came back for one last beautiful subdued explosion. If you ever get the chance to see the Prom play, take it!

Damien Jurado and Gathered in Song~

They played a beautiful set. Damien is an absolutely amazing songwriter and that's why it's very good when his live shows are toned down, so that you can fully appreciate every note he plays and every word he sings. That's exactly how their set was. Although it was Damien Jurado AND Gathered in Song, they didn't play any of the songs off the new album, but played Damien's classics.

So many of Damien's songs are full of heartfelt dreams, hopes, and aspirations almost reached. As he sang, "I could be so much better, I have so much potential," everyone was able to relate. It was amazing. Gathered in Song are also extremely talented, changing from instrument to instrument. I was impressed. We got to hear the new bass player, who seemed really happy, almost giddy, to be playing with the band — it was cute.

Toward the end, the rest of the band left and Damien started telling us about how much Joe Strummer and the Clash meant to him. "It was the first time I heard punk in the form of a song," he continued, "The Clash were like the Beatles to me." He then went on to cover the song "Straight to Hell." It was awesome, not only because of the music, but also because you could see and feel how much it meant to him. He finished off the set with a new song. "I think rock and roll is in a sad state these days," he said and when on to explain that this song was inspired by American Bandstand and that time in music. It was a brilliant song and it totally captured that era. But what it all comes down to is that Damien Jurado makes some of the most passionate, beautiful music around. If you haven't heard him yet, you should get yourself down to your local record store as soon as possible!