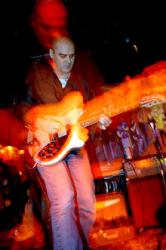 I have been hearing and reading about the A-Frames for ages. A favorite of Jennifer Maerz (a favorite non-imaginary music reviewer) as well as my co-worker Tai (hi Tai!), they've been on my imaginary to-do list almost as long as finally getting around to cleaning that thing in my house that I'm never gonna have time to clean. But screw chores! The A-Frames — I had to make time for the A-Frames! So I did.

Arriving at the Sunset Tavern, I was initially surprised — the place was packed, more so than I've ever seen it. This was a music guy's show, I think. I only recognized a few of the faces (the aforementioned Jennifer, as well as the late-great 764-HERO's John Atkins), but it was evident that the people there were INTO music, and the conversations I overheard all night buzzed with snippets of band gossip and guitar talk.

And beer. I saw more PBR that night than I've seen since that time in college when…

The A-Frames were totally unexpected. I anticipated balls-to-the-wall punk rock, straight-forward and overt. Instead, I heard a far more distinct, spared down punk, bare bones and pensive. At times, it brooded and throbbed. As I said, it was completely unexpected, and totally intriguing — like some tattooed-hate-boy who suddenly shows an interest in a litter of abandoned kittens.

Their music features repetitive lyrics and riffs; their songs sound emphatic and punchy, with positively evil bass lines provided by bassist Min Yee (who kicked ass, in my quasi-professional opinion).

They're wonderfully evil. Downright sinister, even. That was the word that kept coming to mind, sinister. Which was curious, as Tai later informed me that before they were called the A-Frames, they were called Ben Sinister. Who knew?

It was such a rock and roll night I wrote a haiku about it:

Opening for the A-Frames were

, a band with a really long name and a lot of nice hair. My new friend Constance asked me about frontman Nicholas Ray, "Do you think he uses mousse?" Definitely. But he looks pretty gorgeous. So I'm not arguing…

The band featured three guys (singer/guitarist the aforementioned Nicholas Ray, bassist Harlan T. Bobo ((his real name?)), and drummer Shane Callaway), playing driving power chord punk-pop. Or is it pop-punk? It was gun-metal hooked, tight and straight-forward, and I liked it out the gate. They should have be the Cutest Band in Seattle. Oh, except they're from Memphis.

Their babe frontman spoke with that droll carelessness characteristic of Cake or King Missile frontmen John McCrea and John S. Hall. In his vocals — and in the overall sound of the band at times — I heard many strong influences, from Bowie to Brit Pop. They featured a great driving rhythm section, especially drummer Shane Callaway, who used this odd backhand stance with his left hand while drumming. Are they a punk band with pop sensibilities, or the inverse? And does it matter..