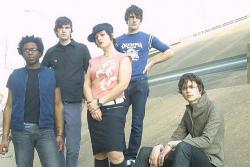 As many of you already know, I am a *HUGE* fan of Pretty Girls Make Graves. A superfan. After my actions tonight, there can be no denying I have earned this status.

You see, tonight I went to see Hot Hot Heat with The Thermals at the Vera Project. A great show, undeniably. But I spent the evening with a slight nagging sense of sadness, as I knew a mere mile away at Graceland, those Pretty Girls were playing, and I was missing it. So when the Vera Project show let out and I was heading home, I noticed the time. Only 11:30. I wonder if I have time to….

{screech! turn car around and back down Denny to Graceland!}

…. to get to the show just as Pretty Girls Make Graves take the stage! Why yes, yes I did have time!

As per always (and I should know — I believe this was my sixth time seeing them), PGMG delivered an incredible live performance, assailing us with the pop-punk songs from their debut full-length Good Health, with Andrea Zollo charming us with her stage banter along the way. I also heard a few new songs, including one I believe was called "The New Romance" (sorry readers, I was too excited to take notes!).

It was strange, hearing a totally new PGMG song when the others are so known to me, as the soundtrack of Dana's life, first-half 2002. Which got me thinking — it's been a long time since I've had a true musical love. I had my obvious top three from last year. But those releases are now each a year old. I am good and ready for a new musical love!

I already am mad for The Postal Service, and I'm optimistic that The Thermals will likewise make my heart skip a beat. Anyone else have any suggestions? Send them my way.

Of course, the Pretty Girls Make Graves web site is telling me that they're recording with Phil Ek again, with a new CD due out on Matador in September. Always nice to anticipate infatuation, isn't it….?