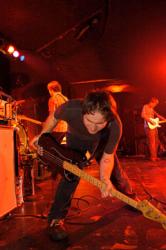 As many of you know, Liz and I have been obsessed with the notion of the "superfan" for quite some time, and have written near-volumes on the topic. At the Death Cab for Cutie show, we met superfans that exceeded our wildest, most superlative expecations. These fans set a new standard for the distances one could go to in the name of music… and they served as a needed reminder in our bleary schedule of show-going that Seattle has a kick-ass, world class music scene that must be celebrated!

First we met Brady and Julie, a fine friendly upstanding young couple, who it turns out have flown in from Pittsburgh just to see this Death Cab for Cutie show! Brady had never even been on a plane before.

To further establish Brady's title of Death Cab for Cutie superfan: Brady told us if he could have dinner with any three people, dead or alive, they would be: Leonardo DiVinci, because he's one of the most creative people in history; John Lennon, because, well, he was John Lennon; and Ben Gibbard, because, "…he's not a rockstar — he writes about shit I can relate to."

Then we met Mike, who had flown in from Manchester, England for the show!

This was Mike's second DCFC show in the US (he saw them the night before in Anacortes), and this guy was on top of the Seattle music scene. We suspect he would rival most Stranger writers with his local indie-prowess. He could talk circles around any Value Village hopper about Carissa's Wierd, the Pale and John Atkins/764-HERO.

Plus, in the moments before the show and in-between bands, I was also able to get his inside scoop on some recent British imports as we traded facts confirming that we are living opposite existances. He, a Mancunian obsessed with the Seattle music scene and me a Seattlite, longing for anything related to Britpop. It was a strangely beautiful realization. I loved his exclamation, "I could never have a conversation like this about Elliot Smith in Manchester!" Obviously I retorted with, "You try having a Bluetones roundtable at the Cha Cha!"

We haven't said a word yet about a Death Cab review. Do you think Mike and Brady and Julie would want it that way?

Right… after a near-life-altering Thermals set, the DCFC boys did not disappoint, delivering an immaculately sweet performance as only Death Cab can. By the second song, an incredibly over-excited Brady exclaimed, "I am going to freak out, I can't deal with it!" By the fourth song we were afraid he might implode, as he proclaimed, "It sounds like true love!"

They sounded great, and the room full of Bradys were in heaven. The previously placid audience was singing along, hooting, hollering and swaying about. A fine show to introduce their new drummer, Jason McGerr (who you might recognize him from his days with Neo). Just like Mike, this was his second night of Death Cab for Cutie fun.

The set was so filling. They hit all of their landmarks and points in-between: "Company Calls," "Company Calls Epilogue," "Styrofoam Plates," "A Movie Script Ending," "Photobooth" and even a yet to be released song (impressive, of course).

And, they dedicated the entire set to Mr. Rogers. Ben lamented, "He would have wanted it that way."

Yes. This was the perfect first show for Brady, the perfect second US stop on Mike's Death Cab tour and the perfect cap to the evening for the rest of us who didn't have to travel so far to bed…

…and the perfect reminder of how magnificent and vibrant a music scene we have here in our fair city. Now pardon me while I go weep…