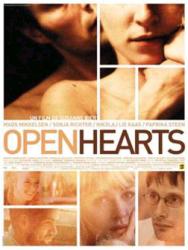 Disclaimer: I have a slight proclivity for things Scandinavian. You may have noticed this already — I recently got a little, um, moist for (Norwegian) Sondre Lerche, and temporarily went out of my natural mind for certain members of (Norwegian) Cato Salsa Experience and (Swedish) Soundtrack of our Lives. But you may not know, say, that my apartment exhibits more than a little Ikea-ness, or that Copenhagen-based SAS is my European airline of choice (I have in-flight magazines to prove it), or that the sounds of Röyksopp and Björk make me quiver with sheer delight. (Ooh, those umlauts!)

My point? When a Danish drama like the excellent Elsker dig for evigt (Open Hearts) comes along, I may tend to rate it a little higher than I would a similar film set in, say, Topeka or Boise. OK? Take it or leave it.

Produced under the strict regulations of Denmark filmmaking collective Dogme 95 (yes, that's still going on), Open Hearts has a documentary-like realism reminiscent of other Dogme films (Vinterberg's The Celebration and von Trier's The Idiots are examples). But director Susanne Bier avoids the ugly starkness of those pictures and manages to give us an honest-to-goodness chick flick. In tone it's like last year's Dogme-lightful Italian for Beginners, but with far less goop.

Young Copenhagen couple Joachim (Neanderthal-sexy Nikolaj Lie Kaas) and Cecilie (lovely Sonja Richter) get engaged. It's all sweet romance and warmly-lit spaces until, abruptly, Joachim is involved in an accident that leaves him paralyzed. He shuts down and turns into a stereotypical Dane bastard, leaving poor Sonja to her pop CDs (the soundtrack of her life is heavy on the Anggun) and grainy, heartbreaking fantasies of Joachim reaching out to her once again.

Meanwhile, in a fabulous house on the other side of town, we're introduced to the family of the woman responsible for the accident, Marie (astonishingly performed by Dogme regular Paprika Steen). She has a hot husband and funny kids (little Gustav is my favorite — see the movie and you'll know why), is settling beautifully into her middle age (she looks like an older, wiser Diana Krall), and is just cool. You want her to forgive herself for the Joachim mishap and enjoy her wonderful life.

Then Cecilie starts having an affair — with Marie's husband! And, well, you can't blame her. Niels (Mads Mikkelsen) is one of the most beautiful men I've ever seen. With his comforting, droll soulfulness and hair so dark-brown it looks black, and that body (FYI, he gets most-of-the-way nekkid)… well, I just might have done the same. And as much as we've grown to admire Marie, we can't hate Cecilie, or even Niels (he's too hot to hate… and we've gotten to like him for other reasons too).

This balance is a great strength of Open Hearts — despite the soapy-sounding plot, it never goes bitch-slap over-the-top. The cruelty that the damaged Joachim begins to exhibit (teasing a nurse about her son's death by drowning, for starters) is genuinely chilling. And when Marie and Niels' meddling teen daughter Stine follows daddy to Cecilie's pad with evidence of his dastardly behavior, it becomes clear that she isn't only there as a conflict-inducing device. "You won't even buy me a dress," she tearfully shouts, "But you buy her a house full of furniture!?" Delicious!

Though its Seattle run has ended, make an effort to seek out Open Hearts. It's touching and devastating, magnificently acted, and pretty damn beautiful — qualities you don't need a Scandinavia fetish to appreciate.