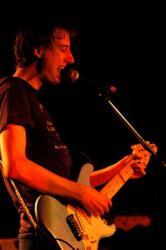 From Preons to Pris, of Stars and Stares

It was a quadruple bill on a Sunday night, starring…

The Preons might win the award for most- unexpected- opening- band- on- a-Sunday, in both the visual and musical subcategories.

They whirled and thrilled like a circus, featuring not only your typical guitar-bass-drum-vocals, but also varied between keyboards, turntables, toy instruments, and a trumpet. Their music swept through the room with its intricacies, reverberating both charming and unique.

Plus, they had a xylophone. Wasn't I just saying how indie-rock has been screaming for a xylophone? It was hot.

Seriously, it was. Each song sounded like a poppy love-song mix tape. I found myself thinking that if they had a CD, I wanted it. {imaginary aside: they did, and I got it. I love it. Thanks, guys!}

Josh (the singer — sorry, we didn't get his last name, but I did find out he's from the sadly defunct local band Hourglass Lake) had dreamy silken vocals like tofu (I love tofu). I loved the male Aisler Set-ish 1950's boy-next-door sound, clean and airy, like a Sunday bike-ride with a wickerbasket. They also featured lilting female accompanying vocals, and witty samples of 1950s scary sound bites between songs.

His sister (again we have no name — bad imaginary girls!) drummed, dressed like a pirate, and effortlessly hauled her own gear offstage — making her my new personal hero.

The sound clips also gave me the impression of a mixed tape, like something my clever first boyfriend Todd Nolan would have made me my senior year in high school because he was so cool and cared so much and had such fantastic attention to detail.

The Preons sound as sweet and distracting as teenage love. This demo they gave us is really good…

It was as fun as karaoke in Ohio!

Is it just me, or does it seem like every band has reintroduced an early 80s synth-pop keyboard lately? All those kids who were forced to take piano lessons back in the day are psyched now as the indie-bands scramble to snatch them up, I bet.

Just like trumpets in ska bands in the mid-90s.

Once they launched into "Moth," the most identifiable and catchy song of their set, I realized I had heard them play once before on KEXP's Audioasis. I just searched the station's archive and couldn't find it there, unfortuntely… but if you wanna have a listen for yourself, you can; they've got a bunch of songs posted from their "Becoming You" debut EP.

Ahh, the lush Stares set sounded like soundtracks to fairy tales. The rich minimalism of their set resonated like a seeing- each- other- across- a- crowded- ballroom magical music moment, with breathy vocals, subtle drums, and gently rhythmic guitars accompanying Angie Benintendi's serene keystrokes.

Either that, or it sounded like a librarian talent show.

The Stares' music would make a fine accompaniment to white wine or chamomile tea… preferably on a veranda.

When I get married, I want the Stares to play the music when I walk down the aisle, and perhaps during the cocktail hour (or two). But definitely not at the reception…

They played contemplative, seriously-sophisticated music. She made that keyboard sound as rich and mature as a grand piano. They were too fancy for Graceland, and I found myself wishing I had spent more time on my hair, or had worn a belt that matched my shoes.

Yeah, this music made me feel like I have a lot of growing up to do.

Vocally, guitarist Drew Wittemore and Angie alternated duties. They reminded us both of a less somber but more sober Saeta, with gentler voices and more sophisticated vocals. They were sad and sweet, and indeed as intent and serious as a stare.

Holy SHITE, Pris rocked and those boys have super-gorgeous arms. They closed out the night, and shame on all your folks who left early because you had your day jobs to attend to on Monday morning, because these guys kicked serious ass and they played to a nearly empty room. And that is just sick and wrong. Rubbish!

Liz, Ryan and I had kicked back into a booth, but by halfway through the first song we migrated to the front out of sheer respect for the rock. They sounded like crazy food-fight indie-rock, solid and hot, with flailing drums and gyrating stage movements. These boys have been practicing…

At least their moves…

And speaking of moves…

Oh no. You're not gonna talk about that, are you?

I have to. It's my journalistic obligation. How can I document the night without a mention of the Superfan To End All Superfans (STEAS) and her moves?

STEAS stood front and center in the midst of an empty Graceland and tossed her head and thrashed her pelvis and danced, uninhibited in her expression, unabashed about how out of place her actions were, and completely enthralled in the music. We were nearly as dumbfounded by her as we were impressed with the band.

Did she freak the band out, or did they thrive on her energy? Does it matter? She was having fun — so good for her! Good for her for just loving and moving so much!!

You know, I think that Pris would make a good boy-band, not in a modern Backstreet Boys way, but in a classy Monkees way. They all have characters: the buoyant bas
s player, the goofy sidekick guitar player, the boy-next-door drummer, and the ringleader lead singer. Plus at least two of them wore leopard guitar straps, and they were all pretty hot.

Two of the guys were wearing Guns and Roses t-shirts, and one wore Fleetwood Mac. Do I smell a sense of irony? Were they making mockery of our indie-rock t-shirt theories?

Well, they can if they want to because they were just that good.

And then they closed their set by covering… PJ Harvey!!! "Down By the Water," never a favorite PJ tune of mine… well, not until I heard what Pris did to it. Oh Goddamnit! Pris frontman/self-professed dictator/Milkbar founder and all-around indie-rock cool guy to know Burke Thomas told us that he's been highly influenced by raw female rockers, like early Liz Phair, PJ Harvey, and the Pretenders. To which we say, merow!

igDana and I were so impressed we found (and loved) the a track online, called "Doobie Down Down" — and were surprised at how much poppier they sounded recorded than at their live show. Please don't view this as criticism. They sound phenomenal either way.

Pris have two full-length CDs and two EPs, which you can only buy only from their site. So we'd advise you head over there and buy it. Just like we advise they send us free copies! 😉