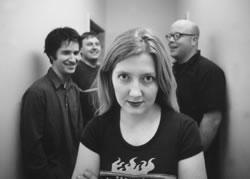 I, Imaginary Dana, being of somewhat sound mind and not-so-sober body, am about to confess what might undoubtedly sully my otherwise spotless music-loving reputation:

I dislike all-ages shows at the Crocodile.

There. I've said it. I'm not proud of it, but I'm not gonna hide the glaringly obvious truth any longer. Someone had to speak out, and I'll take the heat for it. But first, please allow me to elaborate and explain.

{and those of you who wanna skip the tirade and just hear about The Reputation, you can…}

Take the opening night of Ladyfest Seattle 2003. I was thrilled at the propect of catching Ms. Led, the Reputation, and Visqueen all playing on the same stage. I was at likewise excited to meet my friends, to yell over live music, gossip relentlessly, mock others… you know, all the associated show-going frivolities. But when I arrived to the Croc, I found it was an all-ages show. And my heart sank.

Don't get me wrong — I am in full-on support of the kids hearing live music. I am eternally grateful to places like the Vera Project and the Milkbar (and jealous too, since we never had those kinds of places back in my day in South Florida!). Plus I dig all-ages shows at the Showbox, where we can all hang out in the same space that contains the stage — the older kids simply entering one of the three side bar areas for beverages, as desired.

But at the Crocodile (and at Graceland too), the venue closes all but the very back bar as off-limits to drinkers. For those of us familiar with the general layout of these places (and I think most of us are), the problem becomes evident, as it's impossible to hear the band play from the back bar area. Show-goers must choose: enjoy a tasty beverage, or listen. And frankly, that's lame.

The Crocodile is a bar with a stage. People go to the Crocodile to have drinks and hear/watch shows. The Crocodile earns their money from drink money and show tickets. If a visitor to the Croc can't do both, well, that's totally lame.

Don't even get me started about how crowded the bar areas get during these shows. I nearly sufficated at the Soundtrack of Our Lives show last week. Plus, so many show-goers that night missed the outstanding opening act (Caesers) because they were hanging out in the bar. The bands have gotta hate this rule — as it means they play to an emptier room. The venues must hate it — as they lose drink money during the shows because people go watch the band. It's a losing proposition all-around.

One final tirade on this subject that's really more of a suggestion: venues, please use common sense when planning all-ages events. For example, at the Bright Eyes show, I'd estimate over half the attendees were under 21 — and that's great! But at the aforementioned Soundtrack of Our Lives show…? I didn't even see a handful. Same goes for the Neil Finn/Rhett Miller shows earlier this year. Has any one under 21 even heard of Neil Finn? Sheesh. I know I'm coming off all curmudgeon-ly here… but choose your all-ages events wisely, that's all I'm saying.

There. I've said it all. Hey, a girl can do what she wants to do. And that's what I'm gonna do.

I brought you this soapbox in part as a caveat, to explain my inadequate coverage of the Reputation. You see, on the night in question, I was forced to make that decision: spend time with my wonderful friends (who had a table in said back bar area), or listen to music — sans friends. Perhaps this motivated the venom in my all-ages tirade. I don't like to make choices such as these! Meh! I guess you can all see where this path leads… I ended up splitting my time between sneaking dry peaks at the Reputation's incredibly solid set and, yes, enjoying moister companionship in the bar. Since I seem to have used up my non-music related blather with the aforementioned rant, let's {finally} discuss the Reputation…

The Reputation featured three guys with sassy {and yes, I hate how overused this term is — but in this case, it's apt} rocker girl Elizabeth Elmore in the front, taunting and belting her way though some tasty punky-pop tunes. Interestingly, a wee bit of research revelaed Elmore formerly fronted a band called Sarge, who was proclaimed a Hot-Band-of-the-Year by Rolling Stone in 1998. She then left the rock to pursue a law degree, making her the first lawyer-come-rockstar I've seen post- Shonali Bhowmik from Atlanta's Babyfat (now called Ultra Babyfat).

Now with a self-titled release on Initial Records, the Reputation have received gobs of glowing praise from all sorts of news sources, including AllMusic.com, Alternative Press, the Village Voice, CMG, and even (eep!) Maxim.

Visqueen's Rachel Flotard joined me for a minute during the show and asked, "Who are these guys? They're really good." Then I think she went into the bar to get a drink, damnit.

Rachel was right. Simultaneously brash and winsome, raw yet highly-feminine, Elmore personified the consummate female musician — revealing vulnerability without sacrificing credibility. Her songs shimmered and blistered with a brainy ferocity, and her clear potent voice sounded at once like an old friend. I'd like to be her friend, actually.

I had my chance to say hi in the ladies bathroom {you guys know that's where all the good stuff happens, right?}. Elmore stood near the sink talking to some other lucky fan who got to be her friend, and I didn't want to interrupt with something stupid like, "I really like your music!!"

So instead I eavesdropped, which is always classy… and heard Elizabeth (hey, if we're ever gonna be friends I need to use her first name, right?) say that in high school, she was a pom-pom girl — but she used to duck out of the pep rallies to go to punk rock shows.

Okay, that's so perfect for two reasons: not only does that exemplify Eliza
beth's onstage charismatic duality part — rah-rah, part punk rock — but also, how cool is it that I heard the lead singer of the Reputation talking about her high school reputation…? Um, pretty cool…