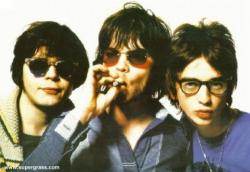 Supergrass, with the Pale

The evening had an edge even before the ultra-dreamy Pale guys or the ultra-sweaty Supergrass lads hit the stage.

It was Thursday night, 3/20/03 – the day after George W. Bush further confirmed my belief that he is an utter… wait, that is not why you are reading this… I don't want to have a Michael-Moore-at-the-Oscars® moment {not that I could be as eloquent}… and Imaginary Boy Friend embracey and I weren't there to dwell on the current fucked up state of the world. I was there to experience a Supergrass show – something I've been longing to see since the first time I read an NME live review years ago. The added bonus of The Pale opening up made up for the fact that anticipated opening band the Coral were detained in Denver due to "inclement weather."

"I told you I got "Life on Other Planets" in Britain last month, right?" asked embracey moments before the show began, a hint of bitterness in his voice. "I just heard it in a shop and a cute salesboy convinced me I wanted it. I didn't think it would be readily available here. Then at the Sonic Boom Records opening it was everyfuckingwhere. Oh well, my copy has a price sticker which reads £11, now what?"

I comforted embracey with the fact that he did need it, that it's a pleasant addition to any Imaginary musical cache. It's a mature take on their earlier rockin' sound. There's no way he could possibly have not enjoyed it since its procurement and his return to the United States… if for no other reason than the added bonus of a lovely pound symbol on the price tag.

"Yeah, it is good, and I'm always happy to attend shows with you – especially when it's free. But look, I gotta say my highlight was gettin' my first taste of the Pale," said embracey.

And embracey's not kidding about taste. Frontman Gabe Archer's tongue was all over the place as he effortlessly, Ben Gibbardly swaggered between equally Ben Gibbard-esque vocal harmonies. It's easy to see how those Death Cab for Cutie comparisons can be made, but the Pale differentiate themselves with an unabashed innocence and a more textured sound.

Right. And one can't deny Gabe's allure. He nervously rocked back and forth, enhancing his sweet, childlike crooning. This is a party-smart band – no smoking or drinking or swearing or meanness. Or overt innuendoes: we'll leave to embracey.

"Don't forget to mention Gabe's sexy enormous hands, slightly greasy hair, and Audrey Tatou smile. What a doll. And that awesome tongue-centric delivery – it's like he's so passionate about what he's singing that he wants to taste every word as it exits his mouth. He's like Amélie's sensitive, oral-expressive second cousin."

And he even stopped at one point to call the entire audience good-looking! How cute is that?

Gabe keeps good company – the entire band displayed lovable boy-next-door charm. There were positive vibes all around – from emotive guitarist Cameron Nicklaus (who sometimes played keyboards), to the ultra-focused bassist Jared Archer and rapt drummer Greg Swinehart – each decked out in unassuming but respectable indiewear. Nothing was forced, and each member seemed truly mesmerized by their music. They were focused on the power of the music rather than only the delivery.

This pleasant surprise left us in an upbeat state of mind – we didn't think of CNN once.

I was excited to see how Supergrass sounded, but the way they look in person has always been a curiosity as well. Throughout their career, live performance photos have been plastered all over NME, and their CD covers always feature images of the band. I'd always read they were considered heartthrobs, but so far the visual evidence I'd obtained hadn't supported this rumor.

"Listen, I am so over the Stephen Tyler hairstyle," quipped embracey, referring to the lengthy locks of frontman Gaz Coombes. When I explained that he'd had that hairstyle for years, embracey retorted, "Well it's never too late for a positive change, is it?"

It didn't matter much what their hairstyles were like. By song three, the band was dripping with perspiration. But I wasn't sure why.

They were smoking weed??

I thought those were cigarettes!!

Well! So! There is something to be said for a band that is dripping with sweat by the third song, no matter how they arrived there.

They covered the bases of all of their albums – hitting the songs I wanted to hear most: "Alright", "Richard III", "Moving", "Strange Ones", "Sun Hits the Sky" and "Pumping On Your Stereo?" (which they dedicated to the Coral).

It struck me how well they've covered the spectrum of Britpop in their career. They've evolved from the garagey loud early twenty-something "I Should Coco" to the smart tongue-in-cheek "In It for the Money" to "Life on Other Planets" (the recent nod to their Wings forebears) over their eight years in the britpop scene.

Speaking of nods, in the encore they graced us with a Neil Young cover – "The Loner". A fine moment only surpassed by their final song of the evening…"Caught by the Fuzz" — a compilation tape staple and my favorite Supergrass song.

Sweaty or dry, hype or not, this show reminded me that I heart Supergrass. Unadulterated and beguiling. British and proud. Professional and dapper. Orange amp and sweat. Wacky tobaccee and all.