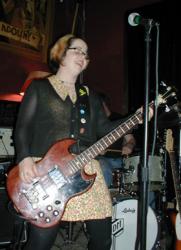 Holy freakin' cool industrial neighborhoods… do we ever adore Georgetown! And holy biscuits and vegetarian gravy… do we dig the Riffbrokers, the band to whom we owe a fabulous evening south of downtown.

{imaginary aside: they are the band formerly known as the [Unsmashable] Riffbrokers — and we think they should add the unsmashable back in, because it sounds cool!}

We especially heart Heather, the band's cool bassist girl who wrote us a really funny email, requesting that we make the trek south for their Saturday show at the Nine Pound Hammer!!!!!

The Nine Pound Hammer was a great place to partake in many tasty beverages. A place that deserves modification with many exclamation marks (!!!).

The drinks were strong, the entrance was free, the folks were cool and laid-back, the company was sparkly, and parking was aplenty. And the music — we can't think of a better accompaniment for a party kinda night like this than the Riffbrokers. They're a slightly honky-tonkin' trio with a ton of spirit, two sets worth of feel-good tunes (more on that later), and attitudes that made us happy we'd been turned down for free press tickets to go see Loverboy at the Emerald Queen Casino. We Got Lucky, as it were.

The Riffbrokers played an effortlessly solid set, full of driving rhythms and strong male vocals (and a bad-ass rhythm section too). We all commented on what a long set it was for an opening band, impressed with the breadth of their songs. Imagine our surprise when they got up to play a second set. What was going on…?

As it turned out, we found out that lead singer for the headliners for the night {ahem: I'm not naming names, but they are playing with the Riffbrokers again at another show in the very, very near future} had imbibed a little *too* much of those tasty Georgetown feel-good beverages, so we would be without his entertaining services for the evening.

But those guys in the Riffbrokers were troupers. They dazzled us a second time, afterwhich another makeshift band miraculously appeared before our eyes and ears. Ah, the perfect opportunity to chat and exchange recipes with the uber-cool Heather.

She made the most fantastic biscuits and gravy (vegetarian, no less!) for the show. So tasty. We do love us a girl who can rock and cook. Ah, duality. She made mention of homemade caramel brownies for their upcoming CD release party. If I were you, I wouldn't miss it — and this time, it's right on the Hill…

{But seriously — you gotta check out the Nine Pound Hammer too! Get thee to a club in Sodo!}