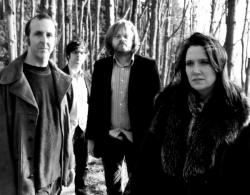 Kinski, with Comets on Fire and Earth

If you've ever been to a Kinski show, you know that they strive to expose all of their fans to the kind of music that influences them or otherwise puts a smile on their face. Most of the time the bands that play with them are a bit too esoteric for us normal rock & roll folk, but it is refreshing to have a little variety in the opening acts.

This time around, relative newcomers Comets on Fire performed in the coveted opening slot. Their set started with elevated noise, the two guitarists and blackboxer emitting all of the screeching they could muster, and I patiently waited for a song to emerge. After four or five minutes, I started to suspect that it never would. Right at the end of the first song, a hint of melody started to emerge, but was quickly struck down by the second song which, although completely different, reminded me very much of the first song. After another three minutes of instruments screaming for rescue, I'd had enough, and decided to hit Shorty's for a little Galaga before the next band.

I returned 20 minutes later to a hypnotic groove somehow carved from the very same elements of noise that had earlier driven me away. I had been tricked. Comets on Fire had issued a challenge to their audience — good things come to those who wait — and I, dear reader, failed that challenge. Steeped in shame, I vowed to stand firm to my spot throughout the entire set of the second band, Earth.

According to local legend, Earth has long been famous for irritating live audiences throughout the Pacific Northwest (It's probably a sin, but the only possible explanation I can come up with for their continued popularity is frontman Dylan Carson's now-famous friendship with Kurt Cobain and his subsequent appearance in (and soundtrack for) the documentary Kurt and Courtney). When they started playing, the first thing that came to mind was, "They really are that loud." Currently a two-piece, the band relies on Carson's guitar melodies. This is their first mistake. Playing a simplistic four-note progression through a distortion pedal turned up to eleven, Earth immediately threatened to pierce our very souls with the forthcoming song.

But I had made a promise that I would not be scared away from what could be the Greatest Band I'd Never Heard, so I stood steadfast. After a few minutes, I thought I might have to negotiate a compromise, but was approached by an old friend, providing an excellent excuse to hold tight. After another ten minutes of strained conversation (did I mention how loud it was?), I finally admitted defeat and escaped to the bar for some air and a drink.

When I came back, what seemed like forever (and was confirmed by my watch as 35 minutes) had passed since Earth had started playing, and they were still jamming on THE SAME FOUR NOTES. It was like a bad introduction to a song that never arrived. I'm not sure if it bothered me more that the song was so simplistic that anyone who'd spent five minutes with a guitar could play it, or that Earth actually chose to present such drivel as their contribution to the world of music. This was a set that raised the bar for Suck. No more will I ever hate a band just because I don't like their music. They will have to create something truly horrific to outdo the outright sacrilege that is Earth. Finally, after about 40 minutes, they ended the assault, played another song which made no impression whatsoever and left the stage. Finally, a band we can trust — Kinski.

It should come as no surprise to anyone who has ever read anything I have written that Kinski $#@ RULED!!! There are not enough expletives to capture the intensity of this band, no metaphors to convey the sheer overwhelmance of their live performance. Kinski is often compared to fellow instrumentalists Mogwai, tagged with a succinct 'soft-loud' descriptor, but this explanation neglects to consider what it is that drives the songs that Kinski writes. Sure they may sound soft, but a close listen to the soft parts of the songs will reveal the loud parts fighting to be set free. Kinski only play softly because if they were to unleash the full force of their loud, we would all be killed instantly, and then who would buy their records?

(Speaking of records, did I mention that this was the CD Release Party for Kinski's new one, Airs Above Your Station? This was a very special performance, as it was the first time most of us had seen them since getting our grubby little hands on the album that has already made my Top Five of All Time. It was comforting to finally have all of those songs that had been running around in my head laid down on proverbial paper, to see how they all worked. Conversely, it was invigorating to hear live all of the songs from the new album with an understanding of where they were going and how.)

I've seen nearly every Seattle show that Kinski has played since the release of 2001's Be Gentle with the Warm Turtle, and they have gotten just a little bit better at every single one of them. I advise you to go see them as soon as possible — if you wait too long, they won't be able to contain the loud long enough for you to enjoy it before you are obliterated.