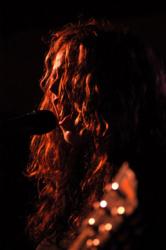 Visqueen, with the Model Rockets

If there's any justice left in this musical world, Visqueen will become the phenomenally successful international bona fide rockstars that they deserve to be, placing Seattle (finally) firmly on the non-grunge map it's been lost from this past decade or so.

But wait — we already know there is indeed a shortage of said justice. For if we were living in a fair and rational world musical, The Model Rockets would have been crowned the grand international high poo-bahs of POP years ago. Then we'd all be driving gas powered cars, we wouldn't be at war, and we'd be listening to great pop songs all up and down the radio dial.

Instead, Matchbox 20 are selling out the Key Arena, CNN resembles my old Atari Missile Command game, and we're paying $2 per gallon for the cheap stuff at the corner Chevron. Oh Goddamnit.

But still, I don't despair — for the Universe cannot be so bleak a place when we have new CD releases from these bands three: Visqueen's long-awaited debut release King Me — the Model Rockets' brand-spankin' new EP Pilot County Suite — and the Minus Five release Down with Wilco. All three Seattle bands honored us with a very over-sold out show at the Croc, to which I say — peace be with us all!

That entire night at the Crocodile was magical. I blame music. Familiarity prevailed, new alliances formed; old battles dissolved, mysteries resolved, and with walls kicked down, information flowed; new adoration abounded, and a benevolent freedom prevailed. It was a night to rock, a night to roll, and most of all, it was a time to rejoice: it was Friday, America wasn't quite yet at war, and every person in that packed place seemed to be honestly thrilled to see these bands play.

Visqueen, Visqueen, Visqueen… I promised those guys personally we wouldn't write about them again! But… I need to mention this: I think the mood that night was so elated because everyone who was there genuinely yearns to see this band succeed. They play great music. They have great attitudes. They have paid their dues; they have brought us joy. In short: they've earned it.

Anyone who has seen them play live knows it — and every time I see a Visqueen show (see freakishly long super-fan listing of previous dates below), they appear increasingly radiant. Playing mind-blowing rock and roll is good for their souls, and the joy that outpoured from these three folks (um, that's Rachel Flotard, Kim Warnick and Ben Hooker, for those of you who've been zoning this information out the last six thousand reviews we've written… 😉 was so overt and abundant that there could be no doubt that somewhere under the chaos in today's world, there's a good healthy sense of benevolence still alive and well and creating. It could cure the world of its every trouble, if only we could harness it and broadcast it out into the stratus {yes, yes, I am getting hokey and sentimental over here…}.

Perhaps you don't believe me, as I'm now an official super-fan-come-potential stalker. Well, I dragged a Visqueen-virgin to the show, and here's what she had to say about it:

"I think Visqueen has an enormously thick sound for being a three piece. Rachel has a gravelly-sweet voice (does that make sense?) — the kind of voice that says, 'If I'm on your side, I'm sticky sweet, but fuck me over and you're GONNA DIE.' Great combination, and a perfect complement to the evening's events.

Ben is a furious drummer who actually looks like he's having a good time. They know what the hell they're doing and they're not shy about showing it off."

I'll second all that. Now count three and pray that Visqueen will have the chance to go forth and spread it far beyond their Seattle roots…

But wait — there's more! Then the ever-lovey Model Rockets positively dazzled us with their pop sensibilities. The trio features Scott Southerland and John Ramberg (also of the Minus Five) both on guitar and vocals and Graham Black on drums. They write extraordinary melodies; Scott and John's harmonizing magic made my eyes well, they sounded so gorgeous and good. And don't even get me started on how they command controlled lunacy from those acoustical guitars… but it was powerful stuff. So powerful in fact that my official imaginary boy friends for the evenings both proclaimed that, "Scott Southerland is our official guitar hero."

Plus those boys are industrious: they released "Tell the Kids (the Cops are Here)" late last fall, and now have a new EP apparently, called "Pilot County Suite" — though damned if I can find it on the Amazon.com, insound.com, or Sonic Boom Records web sites though. It's not even on their official site. Ahh well. Guess you're gonna have to hoof it to your favorite analog CD store to get yourself a copy.

I guess I can forgive them their lack of web site updating and marketing — as they are off spreading their musical word through the world. While they might not be playing Key Arena here, the Model Rockets do have quite the international following, as they've left for a tour of Spain (take me with you! take me with you!) for the rest of this month.

Sigh. I'd like to think of this as a mission of international diplomacy, with the US sending its best and brightest…

PS ~ I didn't stay for or review the Minus Five. Sorry. My only insights for you… Scott McCaughey is the Dude, Ken Stringfellow has swamp-green hair like an evil Fraggle, and igLiz and I wanna be friends with Peter Buck. Hi, superstar band. Like you need me to know how good these guys are, with a line-up like that… {but in case you do need me, here's a mini Minus 5 Bumbershoot review for ya…}