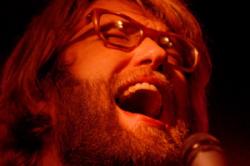 Oh God, how I adore The Long Winters. With this, our… I believe… sixth review of this spectacularly gorgeous band, I believe I can safely say I have crossed the line from super-fan to potential stalker. But have no fear: my adoration has only benevolent intent. Tonight's show featured just the frontmen John Roderick and Sean Nelson, with John playing his acoustic guitar and the rest of the songs carried by voice only, all Simon and Garfunkel-esque.

I feel like every Long Winters show I've seen over the last few months has been a tease. They play these great new songs "from their new album" and we are left to wait until May 6, 2003 to get our own repeatable-upon-command version of them. Knowing that the release date for When I Pretend to Fall is nearly upon us, I am able to focus a bit more at the day job. Hearing them sans rhythm section added another dimention to these unreleased but familiar tunes. The verses of revealing admissions were intensified and the playful coy innuendos were sweetened in the evening's stripped down translation.

I spent a majority of the show too dumbfounded and entranced to move my pen, and found myself wishing I weren't normally so damn textually hyperbolic, because I lacked the superlative adjectives to convey how great they sounded, with John's sparsely fingered electric guitar and their duo-ing perfectly crispy clear v-o-i-c-e-s. They brought harmonizing to Olympic proportions with their astonishing vocal precision.

All that and they looked pretty, too! Both Sean and John were dressed in their Sunday best. They looked {and I am sure smelled} fabulous. Normally two singing men dressed in suits armed only with a single guitar for instrumentation would frighten me, and cause me to close the curtains and lock the door. In this case I exclaimed, "Hosannah in the highest!!" and looked for the tip jar/donation thingy. Get that Sean Nelson a pulpit.

These entire incricate songs were completely carried — even enhanced — with just vocals doing all the work. They ended with a Simon and Garfunkel cover, "The Only Living Boy in New York," which brought a round of applause from John's mom and sister in the audience.

I can imagine a reality where one day, people refer to smashing male duos as being "Roderick and Nelson-like." I've never heard their equal. I found this quote from an article on tagteammedia.com, and I realized I could never express my admiration better. So I will let their words speak for me…

"Sean has described John's music as the perfect canvas for his harmonic stylings and his friendship with John is at the core of The Long Winters. Sean's and John's voices harmonize with chilling, supernatural beauty, and their performances are spellbinding. Former Velvet Underground bassist Doug Yule once described them as the greatest male vocal duo he had ever seen. Seriously."

Now those Long Winters are gonna need to release that new CD already if they wanna hear any more sweet talkin' words from us.