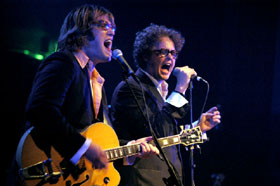 Having Sean and John of The Long Winters open up for They Might Be Giants was the icing on the cake. Or was it vice versa?

Either way, the duo characteristically charmed the crowd with tracks from the old (The Worst You Can Do Is Harm) and the new (When I Pretend to Fall). This evening they cooked up the usual recipe of acousticated songs from the Long Winters catalog, but what truly left the crowd awestruck was their cover of Soundgarden's "Mystify" in honor of John Flansburgh's birthday. I hope the Behind the Music re-enactment of Sean gospelic wrenching, twisting and tangling will do the performance justice.

These shows were just the beginning of Seattle's "Long Winters Week." igDana saw them a few days later on the first ever Sonic Boom Records Tour celebrating the release of When I Pretend to Fall.

Some of the best moments of my life have been at They Might Be Giants shows:

… and then there's the 17 or so other times I've seen them. Like a pet or a peanut butter milkshake, each is your favorite for one reason or another.

The two recent performances, besides being wonderfully up close and personal in the smallest venues I've seen them play in some time, were fine retrospectives of some of TMBG's arsenal, each offering memorable, magnificent moments. The opening of the Portland show with "Bed Bed Bed" (God, I love a good confetti explosion) and the evening's game of "Spin the Dial" resulted in an impromptu cover of "Jane Says" by Jane's Addiction.

Mark your calendars: May 6th is John Flansburgh's birthday… which resulted in the evening not only including another hilarious version of "Spin the Dial" and the "Hey Hey We're the Monkees" cover but also a good old fashioned "Happy Birthday" sing along and candle blow. Fire codes be damned!

Mark your calendars II: Go see the They Might Be Giants documentary: Gigantic (A Tale of Two Johns)
It is making its way across the country and will be in Seattle (again) at the Varsity from 8/15/03-8/21/03. One very eloquent critic exclaimed, "It did not disappoint" and another called it "as delightfully offbeat as its subjects."