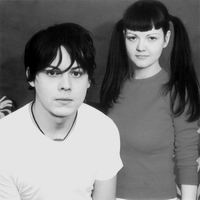 Few things will make me get in a car on a school night to drive over an hour to a show. But with the White Stripes: I didn't question the appropriate action to take. Thankfully, the concert gods offered me a second chance at seeing a guaranteed great show by one of the few indie darlings that have a soul {Note: I am notoriously a sucker for indie darlings, so I am the last person who can say that last statement with a tone elitistism.} Laziness and an odd sense of sell-out immunity convinced me that I didn't need to buy a ticket to their Seattle show while they were still available. So, when I found out that tickets were still available at the Olympia show at the Capitol Theatre, I quickly convinced my friend to go on-line and procure ones for us.

The Capitol Theater is a *movie* theater, with popcorn and junior mints and everything. And the White Stripes — the White Stripes, who just played the MTV Movie Awards — played at a movie theater. In Olympia. Weird.

I missed the opening band (damn last minute work responsibilities!), but quickly got over it when Dana gave me her review.

Yeah, I was all excited to hear Brandon Benson open, but they stopped touring with the WS up on June 8th. Tragically. By the 10th, another band opened: Whirlwind Heat. Who? Um, Whirlwind suck is more like it. We should have stayed at the lounge next door. Then I could have continued to partake in the Whirlwind Stoli orange and soda, my drink special for the evening (with lime, thankyouverymuch).

So the Girls secured our spot for the next two hours: in the aisle wedged behind Andre the Giant and a couple people we were shunning (long story). Once Meg and Jack hit the stage, periodic mild chaos ensued. Despite the enthralling performance, I spent the evening distracted by rudeness, as lines of 4 or 5 tank-topped bleach-blonde freshmen all led by the same denim-jacketed frat guy plowed past us with each chorus. Then, on top of crushing us with their smelly damp collegiate bodies at least 40 times, said frat boy and his entourage had the nerve to start good ole fashioned 1992 crowd surfing on the peeps in front — over and over. Our imaginary girl friend Marlene even had her glasses knocked off by some jerk climbing over the seats.

Don't get me wrong — the bulk of my time was spent admiring the band. Jack White is one of the few people who can successfully combine a persona 50 years older than himself with a love/hate relationship with performing and genuine musicianship make come off as an authentic force to be reckoned with.

You know, I thought they were good; but you know what else — they weren't the end all and be all that they're hyped to be. But this might be my prejudice coming through, my dislike of all music "blues." I know, I know, it reveals my horribly pedestrian tastes, but as soon as I hear the twangy twang of a blues riff on the guitar, my brain shuts off: bored. The album tracks of the White Stripes veer in this direction.

But those indie-pop-rock hits of theirs — I just love 'em. And Jack and Meg White were cute as buttons. Meg's nonchalant little head shake and smirk while she drums away is simultaneously so endearing and so sexy. Though I've heard she never fully smiles because she has fucked up teeth… who knows?

I left the show in awe — completely nourished and aglow.

Oh, and in case you all are wondering, they still claim to be siblings. Jack introduced her as "his big sister Meg." You've got to admire that sort of tenacity… don't you?