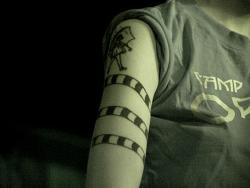 Carissa's Wierd: Smoke Gets In Your Eyes

Yes, the Three Imaginary Girls are such HUGE Carissa's Wierd fans that when we found out they were playing material from their upcoming release, we got tickets for both shows! Friday night they played at Chop Suey, Saturday night they played an all-ages show at the Paradox. Philadelphia band Boxstep played with them at both shows, with Loveless (not to be confused with the record label of the same name… or the album of the same name that inspired said record label) playing at the Friday show. And the biggest treat of all: the LONG WINTERS played at the Paradox show – a CW/LW double bill was good enough to get our old selves to the all-ages show on the Ave and rock out with the kids.

On the first night of the Carissa's Wierd double shot (aka at Chop Suey night) we missed the first of three openers. And of the two that we did see, I must admit that wasn't as impressed as my friends were. Opening band #2, Loveless, scored high in the LOUD department. You wouldn't think that a band who's name first creates a My Bloody Valentine warm and fuzzy feeling would sound like… well… they sounded like the early Spin Art Records band Lotion to me. Guitar, pizza-delivery guy male vocals, strong rhythm section. And that just wasn't what I was expecting.

Loveless impressed me with one of the greatest covers I've ever heard, Dramarama's "Anything, Anything," to close their rocking set. For that, I would forgive them any other indiscretion. Philadelphia's Boxstep were likewise charming, featuring not one but two violinists, a male and female vocalist, and catchy alternative bluegrass melodies. And the lead singer (who just happens to be adorable) also teaches English in upstate Philadelphia. How much cuter could that be? Interestingly, just looked up the Boxstep web site, and I see that they've opened for the Magnetic Fields, one of my all-time favorite musical acts ever, and the second best concert I've ever seen. Strong work, Boxstep!

Those Boxstep folks are nice people. As individuals they were they are good at what they do. Again, one of my friends ended up buying their CD as he was so impressed with their finer moments. Me, I was fine when I arrived too late to catch them at the show the next night. Then Carissa's Wierd took the stage at 12.40a. With a set comprised mostly of new stuff (from their soon-to-hit-the-record-store-racks 3rd album on the new Sad Robot label), they predictably left the place stunned and counting the days until the release of their album in July. I even think they might have smiled more on stage during that show than in any other show. {helpful Imaginary Girl aside: if you go to the Sad Robot site, you can hear MP3s from the forthcoming Carissa's Wierd release!}

Carissa's Wierd sound like swirling; a cornflower blue, ethereal, magical swirling of melodies, harmonies, rhythmic crescendos, haunting and understated lyrics and a million other components that this Imaginary Girl could never describe adequately without just playing the music. It's gorgeous, it's lovely; it's indescribable why these combinations of sounds and players create such lush enchantment.

At Friday's show, they kicked off with an old favorite "the color that your eyes change with the color of your hair" — and then launched into a set of new songs from their upcoming release. These songs were familiar, yet delightfully new, and they sounded less self-effacing and had fewer sound problems than I've ever heard at a live CW show. They sounded sonorous, likely in no small part because of the addition of both bass and slide guitar to the instrumentation, and the presence of Aveo drummer Jeff MacIsaac on, well, drums.

I can't wait to hear that new CD next month.

I can't wait to hear them again tomorrow night… But before we move on, I would be doing you all a disservice, dear readers, if I didn't tell you about the early set imaginary girl friend Marlene and I caught at the Solstice Cafe before I headed to Chop Suey: Drew Victor and Passing Friends. Yum! In Marlene's words, "Yes! Drew Victor: future hottie. Wait, current hottie, future superstar. So this boy is talented, and he backs up his delicate voice and sweet guitar with a stellar back up band: a collection of "passing friends." These friends include a keyboardist, drummer, bassist and — incongrously — a saxophonist. It's a rarity in indie pop these days, but it sure works very well with Drew's song styling.  When we entered, they were playing a somber song, gentle and emotive. After a few heartbreakingly sweet tunes, we got a treat: Drew "rocked out." Now, this isn't to say that his more Elliott Smith style songs aren't a treat, but when Drew and the band gt oloud it suddenly becames an attention grabber. His voice grew stronger, the band got more intense, and the sweet exterior cracked open to show a deeply passionate and intense band hiding beneath the surface. The contrast between the rockin' out songs and the softer ones surprises, but delights, and leaves you wondering what else to expect from this young but so-so interesting band."

In other words: Drew and the band demand your attention and they'll get it one way or another: either by making your heart sink during the softer songs, or by rocking your little world for a song or two. Let it be known that you heard it here first from the Imaginary Girls: Drew Victor and Passing Friends will be a future force in Seattle indie rock!