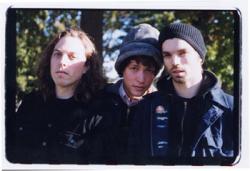 "Thanks for coming out. We're the Backstreet Boys," said Aveo frontman William Wilson to introduce the show. What a kidder!

"I can't tell what I need," he continued after the first song. "I think I might need…"

His voice trailed off. What did William need? He didn't know; I wasn't sure either, as I sat in the grass, pen propped, trying to think of pithy comments for this band. Why couldn't I think of anything to say? Clearly this is one goddamn fine band. No comments? What do *I* need, in order to find something to say here?

I saw Aveo once before (last March, at Graceland), and can't remember a thing about the show. Do I just have Aveo amnesia? This could be serious. A band this talented shouldn't be forgotten! What is wrong with me?

Aveo kept evading comparison. I kept thinking I knew who they sounded like… and then, it would ever-so-slyly escape me.

OK, here's something: I always figured Aveo sounded like every other Pacific Northwest "Built-By-Phil" band in this town (not that this is bad! Far from it… just slightly indistinguishable, that's all). But you know, they don't! William's vocals have a brit-pop overtone (which I ADORE, of course), sounding like that guy from Real Life ("It's my Life") or like Mark Hollis from Talk Talk. My friends and co-listeners Theo and Greg heard a likeness to Morrissey. Either way, the vocals were soaring, whiny-toned, sassy-mouthed (in the best of ways, of course), though not as intelligible as I would have liked.

The lead singer is very skinny, and cute, and he's wearing orange. Mark these as + attributes.

They sounded really diverse. At times, they had that straight-ahead, PNW indie-guitar-driven sound going on… and then they transitioned to a slightly poppier, more spacious and melodic sound.

Then later, the sound evolved into pure pop, melodic and gentle. And here, he DOES sound like Morrissey. "Yes, this song only has two chords," he told the audience. The song tenderly crescendoed, and William nearly started yodeling (in case anyone in the audience didn't hear the Morrissey resemblance, you had to hear it here).

The drummer was goin' CRAZY, good crazy, beating himself into a frenzy up there. He was flailing, tossing his head. I think at one point his eyes might have rolled back into his head. Conversely (and definitely by design), the bass player impassively bassed away, twanging his instrument with a conservation of movement that seemed astonishingly incongruous with the quantity of sound he produced.

"This is the first time we've ever played a show right after riding a roller coaster. Can you tell?" William asked us. Not having much basis for comparison (what with the amnesia and all), I couldn't tell — though they did seem a bit out of their element, playing in the late-afternoon sun.

Aveo sounded almost sinister, after the clean rockin' Peter Parker songs. They sounded more muddled, with vocals less distinct than they were for Peter Parker. Or perhaps this was by design?

"Aveo sound better in the dark in an intimate setting, where their sound fills the space. Outside, the sound disperses too much," said Theo. "In every day life, I would prefer Aveo to Peter Parker, but today — outside — Peter Parker sounded better."

As soon as these words were out of Theo's mouth, William said, "We're much better when the sun goes down." Hah! Apparently, he concurs with Theo's view.

I would likewise advise a dark and smoky backdrop for a proper Aveo viewing. And lucky us: they will be playing a post-Bumbershoot show at EMP's Liquid Lounge at 10pm on August 31st. No smoking, but at least the sun will have set…