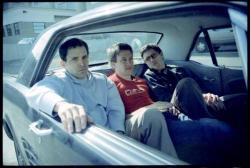 Last Wednesday, I decided to celebrate my triumphant return to Seattle (from the bowels of the suburbs, not from some exotic locale, fyi) by going out on a weeknight. Fortunately for me, Automaton was playing at the I-Spy, meaning that not only was there a band I could sing along to, but also my repressed male aggression would find a healthy outlet.

(Enter present tense, stage left)
My companion, Jeremy, and I arrive at the I-Spy shortly after 11, hoping to have missed the opening acts because we are seeking pure adrenaline and know intrinsically that anyone non-Automaton cannot satisfy this urge. Bitesize (whose name I learn on the way into the building) is somewhere in their set. "Oh well," we think. "They can't play too much longer." (this, dear reader, is foreshadowing).

As we sidle up to the bar, a band member off in the background explains that they screwed up a song the last time they played here and are now going to make up for it by playing it right. The song turns out to be "Double Knots," which I am ecstatic to hear — not because it's good, but because it's been stuck in my head for the past week and I had previously thought it to be a Mates of State song, and had been hating them for it…

Spring forward to the beer in my hand — I'm drinking Rolling Rock, official beer of Rock & Roll, because these girls and their three chords deserve it. Jeremy mentions that the vocalist/guitarist looks like a camp counselor. She's got that glow that says she can't wait to facilitate a team activity that will help us make new friends and learn a life lesson in the process.

As the show progresses, the image comes into focus — all the songs start to sound the same, and I can't help but feel like Bitesize is only playing this way because it's their way of identifying with us. They are trying to coax us into a sing-a-long, trying to make us forget our friends and our families and just enjoy what is going to be a really Super-Duper Summer.

But just when I am about to give in to the whimsy of my own metaphor, Bitesize saves me by playing a soulless rendition of "I've Been Tired," reminding me that these simple pop tunes have been written countless times before, and were much better then. It turns out there's no love in this music — only energy. Blind energy, for its own sake, nameless, endless, and playing for AN HOUR!!!!! But then, just as quickly as they began, they end, and abruptly all is again right with the world.

Automaton begins setting up and I have completely washed Bitesize from my mind. It was all worthwhile because now they are going to RAWK the way only the sophisticated purveyors of Clarions and Banners can.

(Aside: I saw Automaton once before when they were the Automaton Adventure Series, and admittedly I wasn't impressed. But I have moved past that; I have heard what they are capable of, and I can't imagine not being blown away. P.S. – I still believe in your potential to blow me away, Automaton. Just so you know.)

They play, starting with "Safe Bet," which I am really excited about because a) it kicks ass, and b) I have been trying to convince Jeremy that this band really does rock, and this song should prove it.

I wait for the explosion… waiting, waiting, longer than I imagined I would wait, longer than I think I can wait. I know they're departing from the album version a bit but wait — did they just completely change that section? Where is the Automaton I came to see? And as I wait, I start to lose my enthusiasm. I start to wish I were a music reviewer so I could articulate why it is I can't enjoy this show. Fortunately, the Three Imaginary Girls have hearts as sweet as Top Pot doughnuts. So here it goes:

"The music itself was theoretically great. But the band only played three album tracks, which would be fine if their other, newer songs didn't sound like they were being practiced up on stage. I know it's the cool thing to do as an indie band, to keep it loose and explosive up there. But it is my firm belief that if you are a headliner, you shouldn't screw up your songs. And if you do screw them up, you should have a recovery plan in place that will prevent me (and anyone not intimately familiar with what is supposed to happen) from noticing that you forgot how that part goes. Simple professionalism, that's all I want. No, that's not all I want. I want songs that decide from the get-go whether they are thrashers or space rockers. I want the band to exploit its own talent as much as it exploits its amplifiers. I want a headliner that plays more than six songs for more than 35 minutes."

The pangs of anticlimax I felt from being left on the edge of my proverbial seat — poised to start enjoying myself, after looking forward to a show all week, only to have the band abruptly stop and go home — have not let up.