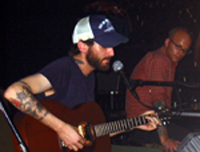 you should be HATED here

First off: the Girls saw Carissa's Wierd twice this week. So if you haven't already read the review from the Sonic Boom Records show on Monday, go read it now.

It's far more focused on how goddamn sublime their new CD Songs About Leaving is, versus how annoying and distracting the crowd was at this show. In fact, you could just skip this review. Unless you enjoy obnoxious crowd stories centered around the titles of songs from their new album (and I ask, who doesn't??!?)

OK, audience members: if you're going to a Carissa's Wierd CD release party, you had better be a fan. And part of fan-dome for a band as luscious as Carissa's Wierd involves being QUIET during their set.

Carissa's Wierd's music soars and plunges, ranging from tumultuous layered rhythms to barely whispered hopes. It's all gorgeous and breathtaking… but not exactly overt. So chit-chatting during a Carissa's Wierd show is NOT acceptable. Please show CW some respect and SHUT THE FUCK UP!!!

so you wanna be a SUPERHERO

"I might be leaving soon…"
This song is one of my favorites from the new CD. Jenn Ghetto's voice sounds so haunted, so ghostly, so tremulous, she sounds nearly other-worldly, her connection here tenuous.

Fans of Jenn's side project S will especially appreciate this track, as she recorded it on her four-track at her home (as the entire S album Sadstyle was recorded).

Unfortunately, the live version of the song was marred by the incredibly buzzing amp, which BUZZED in our direction the whole show, and was especially annoying and distracting during the quieter songs, such as this one. Argh, how I suffered.

SEPTEMBER come take this heart away

"I hope the seasons treat you kind."

The violin on this tune gets me every time.

"I like the way you rolled your eyes right before the fall…. down." This is my favorite Carissa's Wierd song (although on Tuesdays and bank holidays "They'll Only Miss You When You Leave" is my favorite). It is just genius how it builds from the unassuming, with the relentless Jenn picking on her guitar, holding the whole thing together only to hit a wall at the end — leaving me in utter bliss and lying in the floor in defeat. The ferocity at which she plays during this song is to be both feared and admired. I was so wrapped up in the moment that I was able to over look the crimes of my neighbors.

The piano song, the violin song… the instrumentation on this new CD is phenomenally exquisite. The piano is so humble, the violin is so sad… the effect is staggering.

they'll only MISS YOU when you leave

"Don't know how I'll fall asleep tonight.
outside the window awful weather.
the storm will slowly close in on me when its time to leave"

November 16th is a holiday in Kentucky (it was on this day in 1907 that it entered the Union as the forty-sixth state), in Hawaii (only slightly though — the Oahu Railway and Land Company began operating on Hawaii's third largest island on this day in 1889) and in 1981 Luke married Laura on General Hospital (which means this is a national holiday for those who religiously spent the three o'clock hours indoors that year). And it's Imaginary Girl Marlene's brother Seth's birthday too. Is this useless and bothersome info? So was that conversation that the lady to the right of me was having with her escort. This is one of their shortest songs (1 min 50 sec in length), so at least the talkative couple had to take a break from their conversation to applaud as CW once again pulled off the understated majesty of this short song.

FAREWELL to all those rotten teeth

To the pony-tailed lunkhead in the front row, the one who talked throughout the set while he groped his two female companions… the one who yelled "You fucking RAWK!!!!" to the band… some more friendly words from imaginary friend Greg:

"That guy needs to be beaten…
harshly…
in a dark alley…
for about 45 minutes."

"so please just leave me the hell alone…
cause now i know this isn't at all right.
how much more times will i have to tell you?
you try to cry but it's just for show you know i know you know."

I would like to dedicate this song to the girl next to me, who stood in the front of the stage and talked ON HER CELL PHONE during the show. Her cell phone!! During Carissa's Wierd! Oh, the OUTRAGE! I burned with indignation.

At one point, Imaginary Boy Greg (also a HUGE Carissa's Wierd fan) wadded up a piece of paper from my pad and lobbed it at her head. And you know, it seemed to work for a little while. Perhaps next time he should use something a little heavier…

"where is your sweetheart who shelters her from the cold now?"

I was hoping that I would get this song to talk about. Rather than continue to point out the negative, I will wind down on the the positive tip. Every once in a while a perfect break-up song appears. This is one of them. Of course, every time this happens, I am in no situation to use it. Now I am old enough and wise enough to use it to my advantage. Rather than reserve it for therapy to recover from a broken heart, I use it as consolation that I don't have a broken heart. Ah, the sweet feeling of singleness.

None of this criticism has to do with the music, of course. It's absolutely reverent, a gorgeously mournful requim. Forget what we said about the annoying crowd, go buy the CD, and savour the sadness.