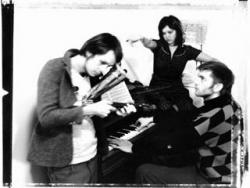 The crazy thing about Múm is that they look so darn… regular. I mean, let’s face it; the four members that make up the band are anything but mundane. First and foremost, they are from Iceland and don’t tell me that doesn’t immediately trigger forgotten memories of the Sugarcubes and the suspicion that everyone in the choir at the First Icelandic Church can sing with a Bjorkian voice.

Then there are the small intriguing facts about the band like that Kristin Anna and Gyda Valtysdottir are twins, that Finally We Are No One was written in a lighthouse, and that a great many songs seem to be about swimming. I mean, they're just asking for trouble in a "there is no way in hell you can live up to this" kind of fashion. Yet, to the delight of a growing band of followers, Múm continues to amaze and astonish both in the studio and on stage.

Finally We Are No One is a pleasant extension of the band’s previous work, which has been notable for its instrumental songs that encompass sophisticated and, often times, experimental melodies. The craftsmanship that goes into each song seems to be the result of a seamless integration of Gunnar Orntynes and Orvar Poreyjarson electronic/G4 influence and Kristin and Gyda’s classical training on instruments like the cello & melodica. While Yesterday Was Dramatic-Today is Ok and Please Smile My Noise Bleed are impressive LP/EPs, the inclusion of female vocals (think Alison Shaw from The Cranes) transforms Múm from an "I think I’ll pick up the new CD" kind of band to a "must fill crack-pipe with more Múm" kind of experience. The lyrics don’t necessarily add anything by the way of plot, but they really accentuate the tone of the music. Although, who knows, maybe all of these songs about swimming really do mean something.

So, with anticipation, I got to I-Spy at 10:30pm and was pleasantly surprised to find the place packed. Don’t forget this is a Monday and I couldn’t help wondering where all these people had come from? It was definitely not your typical Crocodile/Graceland/Chop Suey crowd and I was tempted to assign everyone ankle bracelets with satellite tracking systems so that I could monitor their weekend activities and slip into their secret lives — but I figured that an urban brown bear passing out ankle bracelets might raise some eyebrows so instead I turned my attention to the show.

The sound was great and that’s saying a lot considering how poor various venues around town can make bands sound. Over the course of the night the Múm members played a cello, guitar, drums, keyboard, xylophone, and a melodica. I don’t believe I’ve ever seen a melodica before and it seemed like something that they picked up in a Bavarian village. Watching Kristin and Gyda play the Melodica made the album 'click' so much more for me as I saw and heard its use on songs like "The Land Between Solar Systems."

The other super-cool thing about the performance was the way it seemed like everyone in the band could play ALL of the instruments. The gang was totally nonchalant about it, like, "Hey, I think I’ll just waltz over here and start playing the guitar (or the Xylophone or the keyboard) because, well, it’s not being used and there’s a guitar part coming up soon in this song." Overall the performance was exquisite as the Icelanders fed off of the crowd’s intensity. This was definitely one of the best shows of the year for Seattle.

The thing about bands from places like Iceland or Europe is that they feel American enough to be familiar to us, but foreign enough to emit an intense allure. Múm fit this bill with their cute hey-English-is-my-second-language, isn’t-my-accent-cool kind of way. When they announced "This is our last song", and the crowd expressed their displeasure, they added, "Well, the last song unless you do that clapping thing." And then they went away to some place like a lighthouse in Iceland where we can only hope that they will write more songs about swimming.