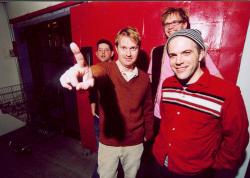 Imaginary Girl Liz is a HUGE Tullycraft fan. HUGE. On the 1-10 Imaginary Girl Liz scale, Tullycraft gets an eleven. Every group has an alpha, and in my circle of friends, there's no questioning who reigns supreme for musical recommendations. In the words of the mighty Pete Hilgendorf (Men of Science) on his musical strategy: "Find out what Liz is doing and copy it."

Liz was chagrined when she realized that Tullycraft's first performance in Seattle in ages would be during her weekend trip to visit her family back in Delaware for her grandfather's 90th birthday party. So when Liz made me promise I would attend Friday night's Tullycraft show, I knew this was a request not to be taken lightly.

I didn't know Tullycraft at all, and had already seen three bands and two art shows that night; I was pretty spent. But it mattered not. I made a promise to Liz, but also, I knew I was in for an evening of amazing music. I steeled my pen and stifled my yawn, and joined the crowd in eager anticipation.

As soon as they took the stage, I was pleased. These guys all look like wacky nerds! And I love wacky nerds! The lead guitar player had an extra large soul patch, and what Carey called, "a muppet around his neck," a guitar strap made entirely of multi-colored latch hook yarn! Amazing!

And people were psyched for this show. The place was packed, the whole crowd standing and pressing forward, jammed to the front, before the show even began. Once it started, the crowd began bopping around, singing along, acting utterly jubilent and remarkably un-Seattle-hip. Hey, the audience members suddenly all looked like wacky nerds too! Woo hoo!

"Tullycraft encourages spazzy dancing. Watch for these kids… danger… spazz out," said Carey. "I just want to embrace the awkward adolescent within me. Fun!" Then she sadly had to go home — she was running a 6K race the next morning, and Imaginary Dana was on her own. Damn athletes and their early morning commitments…

These guys were so funny, so talented, so zany, and so at ease with performing. To liken their sound to other bands… the immediate comparison was They Might Be Giants, both for the irreverent lyrical content and stage banter and for the quality of singer Sean Tollefson's voice; he sounds remarkably like John Flansberg. Minus the accordion player. Mix in some elements of surf rock, early Violent Femmes, rockabilly, and, incongruously, Luna, and you're getting closer… though Tullycraft certainly has their own sound, one that defies explanation by mere comparison.

And can I get back to the stage banter? You know, I usually like to report back moments of on-stage hilarity to our readers, so that those who weren't there can hear what they missed, and those who were there can reminisce. But these guys were so chatty and SO FUNNY I actually ran out of paper. I will go so far as to say Tullycraft had the most amusing on-stage repartee I can remember hearing in Seattle (and certainly, the most abundant).

One particular highlight: after one song, Chris broke a guitar string: a pretty typical rock and roll event, no? Some bands chat while they repair, others sullenly restring. Not Tullycraft; no, Sean composed us a little four chorus ditty about the broken string on the fly, and serenaded Chris until he fixed the offending chord. I didn't catch all the verses, but it went a little something like this:

Hands down the best fill-in for technical difficulty ever!!

Onstage, Tullycraft was at once remarkably confident and self-effacing, chatting effortlessly with the crowd, while likewise unassuming, with comments like,

"This next song is slow. You might want to take a potty break. You have three and a half minutes, because you probably won't want to hear it."
(needless to say, no one budged.)

"This next one's an obscure song. Oh wait, they're ALL obscure songs."
(much laughter ensued)

My personal favorite: at many points, they would try to start a song, and then would have to stop; the timing was off. Each time, Harold Hollingsworth, one of the guitar players, was blamed, with comments like, "That's the free drinking tickets playing," and "They were all out of speed in the dispenser backstage."

Then the audience fought back, and started cheering, chanting even. "Harold! Harold!" The band seemed genuinely astonished by the outpouring of love for poor hassled Harold.

The camaraderie was so strong — I suspect many of the audience members were best buddies with the band members; or, at least they *felt* like they were. Hell, I practically considered them friends… and I had never heard them before this night. Didn't stop me from singing along and cheering (how am I able to sing along when I've never even heard the be songs before?)

How is it possible any band could be this catchy??? This might be the catchiest band EVER. They are INFECTIOUS — I sang along nearly involuntarily, and I don't even know this band.

I told you — any recommendation from Imaginary Liz must be heeded and revered. As thanks, I decided to document the song lyrics, to create a set list for Liz… that way I could fully answer her insistent questions of "what did they play?"

Liz, get over here and review this set-list with me!!

Yay! I get to reenact the show in real time. I wont comment after every song… that could get a bit lengthy. So, let's just talk about the ones that make are on my Tullycraft wishlist of songs to hear live.

Song 2:
"Oh yeah! But she sure looks so good"
"She looks just like a genie"
"How to stop a wild bikini"

What great songs to start the show off with. Is this where I should gush about how sad I am that I missed the show? I thought I joined their email list and that would give me enough warning of upcoming shows so that I could reschedule events like my grandfather's 90th birthday party. But alas, it was not meant to be. I wish I was able to see this song ("Wild Bikini") live so that I could see the full grown boys sing the "Oh Yea" line over and over.

Song 4:
"Jessie wants to be in a punk rock band"

I DON'T THINK I KNOW THIS ONE… this must be on the first album which I don't have yet! (Write us to ask about the location of the official threeimaginarygirls.com wishlist.) The horror! I not only missed the show, but I missed hearing Tullycraft songs I have never heard.

Although Dana doesn't mention this in the above lyrical quote, this is also the song where they mention the Lucksmiths (so unfortunate that I have not had the chance to post a missive on the melodic beauty of the Lucksmiths yet) and The Price Is Right's Barker's Beauties. I would have loved to see this live as I have a hard time singing along to the chorus (it is a bit of a tongue twister for me). Let's not make too much fun of Dana over the fact that they were singing the word "Twee" (which is also the name of this song) not "Swede." Haha. Swede. Silly Girl.

Song 8:
"I hardly know you and I've mispronounced your name."

I always thought this song ("Radio Song") was the savviest marketing ploy ever. All small-town-college "Cutting-Edge" DJs are going to grab hold of this and fight over who found this song first. The winner of the "theme song grapple" will not only own bragging rights, but will also rub in his/her "discovery" by playing his/her "theme song" before every show. I guarantee it.

The "get the girl you want" is from "Glitter & Twang" — but I don't recognize the other two lines that Dana has quoted before or after. Let's just assume that this is another Swede/Twee thing and go buy her some earplugs.

I'll pine here like this IS "Glitter & Twang." So, this is the soothing song. I love the line, "She grew up just north of privilege." I've been meaning to be extremely geeky and research the existence of a town called Privilege near a Double D Ranch. I suspect these lines are a brainy stab at the double entendre tactic. Yeah, okay, no one else cares. More notably, this is the most Luna-esque of the bunch if you ask me.

Song 12:
"Can't seem to get my mind off of you"
Hey is this going to be a Go-Go's cover?? Naw, now the lyrics have changed? Weird.

Song 14:
"And everything you do"
"Knock off my feet"
Do you wanna… just wanna be happy"
"Every word you speak knocks me off my feet"

Song 15:
"boys… girls…"
(I was having a harder time transcribing this one)
"superboy, supergirl"
"that's a fact"
"Please don't let them get you down, you're the only super hero in our town"

It would have been great to hear them wind down with this old song ("Superboy & Supergirl"). I just recently heard this for the first time on a compilation someone made for me and I was excited to have confirmation that their stuff from the first album (which, as I mentioned before, I have yet to procure) is just as infectious and witty as their Beat, Surf, Fun stuff.

Aye, I can't go on. 'Tis too painful. Here it is, the first time Tullycraft has played out since I fell in love with the Beat, Surf, Fun album and I missed it. Continue the lyrical recap without me…

Song 16:
"City of Suburbs"
(by this song, the curious folks around me inquired what I was doing, and just blurted out the name of the song. Kinda cheating, but hey, it was the last song.)

Ok, that actually isn't the name of the song… but I'll take it. Thanks for letting me live vicariously through you this time. We really need an imaginary video camera.