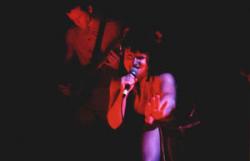 My stars, Kuma! Kuma were grandoise. They took the stage exquisite, bold, and flaming red, flouting drama and passion to our town that normally thrives on the understated, and stunned the teaming pre-Halou crowd with their unique goth-Siouxsie flavored electronica. With red flowers in her hair {and a red satin dress cut up to there}, babe-a-licious front woman Bre Loughlin dazzled us with her impassioned vocals. Her voice chopped and shuddered, as if breathy could shout, proclaim, and pierce, so boldly proclaiming raw emotion and vulnerability that the act of revelation became a great feat of strength in its own right.

I felt like Bre was reading us a story in kindergarden, while I sat on my little mat listening, transfixed.

I agree. Her lyrical sexy nymph-like storytelling held me rapt as a child with milk and cookies being read Dr. Seuss before naptime, breathless to hear the story's conclusion. The band, which consisted of two live guitars and a drum machine, likewise added to this dreamy state with their lush rhythmic sound layers, and the visuals were sublime: red walls, red dress, red shirts, red lights, red flowers… a vermillion feast.

The appropriate color for them to be wearing was red, because they're RED HOT like fire. I felt as if I was at a theatrical performance, not a music show. They're definitely a band you have to see live, and they're tapping into a genre very rare to Seattle. I was mesmerized the entire set.

The lighting was more flattering than a candle lit bubble bath and even though I was shoulder-to-shoulder with equally as smitten fans, it felt so intimate I almost blushed {ok, I did blush, but it doesn't count because it was dark}. Was there a band that played after Kuma? I was so drunk from their performance {from the PERFORMANCE, not from drinks, thankyouverymuch} I had no recollection of anything post-Kuma. If I had to guess their musical influences I'd say Curve, Hooverphonic, Massive Attack, Lamb and Portishead.

I heard Curve as well, with a darkly delicious dose of Bjork and Siouxsie Sioux, along with some magical swirly goodness I'd call uniquely Kuma. I loved the amazing dramatic dance beat set by the programmed drums, with the impassioned live guitars. This would be good music for dripping hot wax; it rang reminiscent of my days past spent at the Chamber and the Vogue {yes, I'm a closet goth girl at heart}.

Kuma should only play in lovely clubs. They're too pretty to play elsewhere. And Seattle has been long in need of some bands that aren't afraid to show how pretty they are…