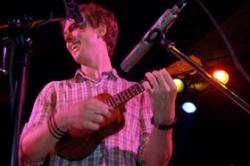 Being a headliner for this evening's festivities must have been intimidating. How to follow pedal masters Black Nite Crash and massively magnetic stellastarr* to a sold out crowd?

You start off with an acoustic version of the song "think of all the things that you could do (look up exact name of this song)," complete with ukulele and triangle. It fit right in with the lead singer's chosen persona of the evening — Midwest boy next door.

Ever seen one of those bands live after imagining what they look like, only to discover you were totally wrong? Yeah, that happened. I pictured Longwave with long (wave-y?) hair and dark clothes, total New York (which is where they are from) chic. These guys just looked as cute as apple pie and were so nice, not a prententious bone in that magically dark larnyx. Not even the hyoid bone.

With each humble bit of banter between songs, I couldn't decide if I was more charmed by their boy-next-door demeanor or the dreamy jangle of their songs.

I vote for the haunting vocals. It was so disconcerting to see this imposing deep voice coming from frontman Steve Schiltz's unassuming figure that my mind started subconciously seeking explanation… and I found myself pondering his origins and gifts — only to conclude that clearly his voice was a gift from the gods.

I found myself immersed in this warped Jazz Singer "Love on the Indie-Rocks" fantasy, somehow certain that somewhere else far far away, singer Steve has a rabbinical or clergy father dressed in black, a father in whose footsteps he was meant to follow… as obviously, with a voice like that, he was supposed to sing for God. But Steve had other dreams, dreams that led him to compose such gorgeous songs as "Everywhere You Turn," Wake Me When it's Over," and "Strangest Things," lucky for us.

Of course, the tragic flip side of our musical good fortune means that somewhere back in the northeast, a father in black has ripped his collar, proclaiming, in desperate protest, "I have no son!!!!"

Strangest things, what I dreamed up during the Longwave show…

I love how they use that deep resonating voice (which I swear sounds like a Britpop John Linnell) to ground the lush guitar and xylophone melodies.

And besides being able to craft songs that embody my favorite 1980 and 90's British spirits, they seem like really nice guys.

Yes, while the comparisons to sounds of years past are inevitable… the interesting thing about Longwave is that I have no exact band of comparison. My theory: Longwave don't sound like any particular other band… they sound like a unique band that could have happily waved with the best of them back in the day: you know, Smith, McCulloch, and now, Schiltz.

Though in some alternate reality, perhaps Potasnick…