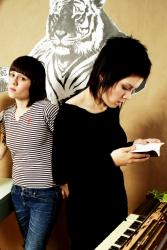 I had the incredible opportunity to hear Tegan and Sara twice in one day. It was National Tegan and Sara Day on the imaginary Char calendar. The first show was a lunch time acoustic set without a back up band. While watching them, I had a strange flashback.

{Forgive me while I go off on an imaginary tangent. Dana and Liz, feel free to edit out the next two paragraphs.}

I remembered seeing Diane Arbus's 1967 Identical Twins photograph for the very first time. I couldn't take my eyes off the portrait. It took me the majority of the day to figure out why it is such an intriguing photo. The twin girls look so identical that my mind was switching from the girl on the left to her sister on the right and back again, feverishly looking for differences. When I found one difference, I started in again looking for another. My eyes never rested on a focal point. It was jarring. It was unnerving. It was phenomenal and still is one of my favorite photographs.

I found myself doing the same thing at the Tegan and Sara acoustic show. I strived to find the differences in them; In their style, their vocals, their playing, their facial expressions. It was almost like Diane's identical twins had grown up, formed a rock band and come to life before my very eyes.

{Ahh dear, new, fresh Char — don't you know that imaginary tangents are where all the best parts of the site get written…? ~igD and igL}

My constant eye shifting uncovered these differences: Tegan has a more weathered voice, tending towards the smoky and more aggressive. At times it even appears as if she's singing through clenched teeth. Sara handles most of the stage conversation {and provokes Tegan to respond}. Their sisterly fighting on stage is humorous and insightful to what their childhood must have been like. Between songs, Sara stated, "I can't believe I'm asking this… but can I get a little more Tegan in my monitor?" They even turned their playful aggression onto an obnoxious stage heckler who kept screaming out inappropriate and rude comments. I believe it was Sara that finally said, "Um, yeah, you can fuck off" {as if I needed another reason to love them.}

In a music world populated with made-to-order dancing divas, Tegan and Sara prove that making excellent music has nothing to do with the quality of their choreographer. They both play guitar, do their own songwriting, sing, compose, have mastered stage banter, keep a personal tour diary constantly updated online, and they're both understateably gorgeous. They are the dynamic modern Renaissance duo.

Nothing annoys me more than singers who tote around an instrument on stage as if it were the latest fashion accessory. My feeling is if you're going to play it, play it. If you don't have the skill to divide your mind up into vocals/instrument, great. Put the instrument back in its case so it doesn't get dusty, or hire another band member to play said instrument. Tegan and Sara were both equal opportunity players. They switched from electric to acoustic and were so addicted to playing that they even hit random chords between stage banter comments.

With the sarcastic comments, telling some random man to fuck off and the music, there was rarely a dull moment at the Croc that night. The thing that blows me away is that they are equally as touching as they are funny. In preparation for one song Sara offered background information, "This next song is about when you get your heart broken and you try your best to glue it back together and you wake up one morning and you're so happy because you realize 'Oh my god, the tape's holding.'"

If you haven't noticed from the sheer length of this review alone, Tegan and Sara are my heroes.