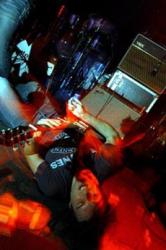 When I first heard "My Coco" {thanks to the John Richards- sponsored Seattle- to- Manhattan- exchange- program}, I hated it, all of it. I hated his strained voice and strangely strangled pronunciation; it maddened my senses and made me want to run my Saturn off the University bridge in an effort to not to have to hear it any longer… and yet, I couldn't stop listening! I found myself craving this song that drove me crazy, I had to hear it again and again… I found myself groaning when the song started, yet turning the radio up to stun, and eagerly awaiting the next chance I'd get to hate that voice, that stupid "my co-co-co" inflection, more, more, more!!

{of note: I experienced similar reactions years ago when first confronted with such voices as Robert Smith and Bjork.}

And what was with that name? Is that "*" tagged on the end some sign of a pretentious, image-obsessed band? Would we be able to get past their chosen naming convention to determine whether or not they were worthy of their spot on this impressive bill, sandwiched between the local shoegazers Black Nite Crash and nummy New York headliners Longwave? And could I possibly endure another day without hearing "My Coco" again??!?!? Help me, stellastarr-with-an-asterisk, help me!

I've been waiting for a good song with the word "Coco" in it. I was likewise fascinated with the name. What is a stellastarr? TIG staff photographer Ryan Schierling offered an interesting theory — could it be a Beatles melding? A combination of Paul McCartney's daughters name (Stella) and Ringo's last name (Starr)?

Or, as it was on some posters around town… is it stellstarr* without that first "a"? That would just kill the whole Beatles theory. But by the end of the first song we didn't even care. Such debate was deemed inconsequential.

The only thing worth pondering is which component of their songs was most addictive. My vote was the antics near-possessed lead singer. Remember during "My Coco" when he dropped to the floor and scrambled around on his guitar, on his back (see photo above)?

I was transfixed by Michael Jurin (the guitar player). Even before I realized that he was in stellastarr* — when he was just walking around the crocodile before the show, he looked so much like Conor Oberst — even down to the dark tight rope necklace.

The physical resemblance was uncanny… and then to have him up on stage with a guitar — I nearly screamed, "Something Vague!" But then my attention was grabbed by the back-up singing bassist Amanda Tannen, who offered a rare instance of exemplary musicianship overshadowing her undeniable indie-hotness.

I found the vocals an odd cross of the aforementioned Robert Smith, the overwrought Richard Butler, and the affable Grover {and Liz thinks Big Country or Styx (circa the "Mr. Roboto" era), but I just don't hear it}. The songs as a whole had a Ritalin-like quality… everything on slight fast-forward, featuring a vocal rush and a push and a nearly staccato-like rhythm section.

I couldn't get enough. They ended, and I wanted more.

Right! Even though they only had an EP available and have an album coming out soon, we had to buy a copy of the EP rather than just waiting to purchase a copy of the whole CD when it comes out.

And can I admit that I've been listening to that EP and their live KEXP performance thing ever since? I've actually answered the phone "Hello my Coco Bean" on more than one occasion and have started talking in the rhythms similar to "In the Walls" — watch out Thermals!

There is just something about the way they channeled their nervous energy into an intricate puzzle of challenging tribal rhythms, much like an early Talking Heads — seamlessly fused with the urgency of the Buzzcocks and the quirkiness of the Pixies, to whom every hipster media source seems determined to compare them. Not to mention — a shirtless drummer.

Oh, we haven't even talked about that. Did you notice that the bassdrum had the "*" design on it in black electrical tape — and that said shirtless drummer had the "*" logo in black electrical tape on his chest? I am starting to love the *. I knew that it was useful when creating a kissy face emoticon — but as body art, it looks great! Who knew? I so admire folks who can stick with a theme.

And I can't wait to buy that album. It's coming to a local record store near you this September, so between now and then you're just gonna have to contact your local KEXP DJ to request it.