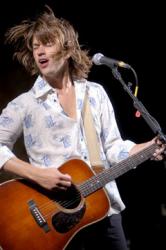 Sans band, he acoustically charmed the crowd with songs from all over the Old 97's map, his year-old-solo album and a couple heart-skip-a-beat covers. He flipped hair, smiled coyly, and most notably, made a couple of announcements that explained that sparklier than usual twinkle in his eye.

In between banter of "this song is an Old 97s song" and "Seattle is so great," he broke the first bit of joyous news.

Rhett and his wife are expecting a wee one! I've oft worried about the future of those Rhett Miller genes. Thank goodness their future is secure with a first installment of the certified RM offspring seriesTM.

And what a wonderful dad he is going to make! As I've espoused before, he is the most genuine, kind and hardest working Y'alternative fellow around. To think that he will be coaching the junior soccer team and chaperoning the fieldtrip to the aquarium… well, the word "quadruple-sigh" does little to communicate the IG level of delight.

After the baby-on-the-way announcement, he explained that he has been playing a variety of music to keep the womb entertained. To prevent over-exposure of the traditional classical-music-womb-inundation, he has been playing songs he feels will make the baby a musically well-balanced. (He fears that exposure to only classical music might make for a snooty baby). With that introduction, he broke into a adorable version of "I Can't Help Falling in Love with You."

Should we start an office-pool on the Miller-baby-name? Know that all reports are pointing to the birth of a boy…

I think that "Drake" would be cool. Drake Miller: a name worthy of that gorgeous and talented gene pool.

"Brhett? I just want something close to the name "Rhett."

Hmm… not that I've thought of this often… but I think it would make sense that they would nod to something influential and close to their hearts.

With that thought… I propose "Merle Haggard Miller." Or, nodding to recent history, how about "Johnny??" That would nod to both the recent unfortunate passings: Johnny Cash and John Ritter.

John Miller! That is the name of the guy I wanted to go to prom with! He ended up going with a girl named Gigi. Then he became a conservative. Weird.

And my grandfather's name was John Miller. He doesn't have a webpage… but if he were alive he'd be 103.

No way! I think we've found a winner!

Johnny Cash Miller. What do you think?

Oh, and as if that whole baby announcement wasn't enough, he doubled the crowd giddiness with another earth shattering announcement: The Old 97s are in the midst of recording a new album! No depression for us all. I am not sure when it is coming out… but I think it is sometime in early 2004.

Thank goodness for Rhett Miller. With this one Bumbershoot show, he made the future an exciting place.