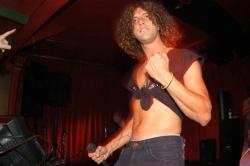 Vendetta Red at Bumbershoot 2003 meant rock and roll under fluorescent lights, with rows upon rows of columns that made the obstruction of the "world's most poorly placed column at the Croc" appear translucent, and linoleum that was reminiscent of my high school cafeteria. The crowd teamed with overzealous high schoolers and a whole lotta folks who looked like they headed into the city solely for this show. I haven't seen that many mullets since I left south Florida, and something tells me they weren't sporting them with a sense of irony. This wasn't exactly how we expected to see Vendetta Red for the first time.

Bumbershoot reminds me of Cedar Point. You can't wait to go every summer, but they you get there and wait in line behind touristy camera-toting jackasses for an hour in exchange for 30 seconds of exhilarating entertainment. Yet you keep coming back.

Hah! Bumbershoot reminds me of the Gap Chasm. Before there was Harry Potter, there was Piers Anthony and the Xanth series… where the magical creatures always fell prey to the Gap Chasm — a huge and devastating canyon with a killer dragon living in it. See, the Gap Chasm had a powerful magical curse on it, one that made all creatures forget its existence as soon as it was out of sight. So even though it was trecherous and terrible — even though they barely survived each encounter, and they vowed never to return that way again — the characters in the books would forget how bad it was, and would plan their travels straight to it once again. They'd forget how awful it was to travel there the last time… they'd forget the long lines and the terrible sound systems and the smelly hippies and the over-priced (but delicious) roasted corn and keep coming back year after year…

Oh boy, but then there was Vendetta Red's Zach Davidson. First words out of his mouth as he took the stage: "Fuck yeah!!!!!!!"

God, I love his hair.

I know. It's our good gene pool!

During the show, I kept wondering if my aunt {you know, Zach's mom} was there. In the lava lamp bar garden it appeared as if everyone's mom was congregating to swap recipes.

He sure loved whirling that mic, throwing it up in the air and not catching it. That's not good for the mic. They throw you out of karaoke bars for wild antics like that!

I'm sure this isn't an original thought, but Zach is sooo Roger Daltry. Which makes sense, as Vendetta Red are a great classic rock band, updated, like the Who only 35 years later, raw and vital.

Zach shrieked like a banchee, delighting the kids and undoubtedly frightening the parents who cowered in the back bar around their over-priced bumberbooze. I like the rat-a-tat-tat of the drums that added nice counterbalancing hips to assailing guitar rock.

The crowd obviously knew every song, howling their approval with each opening note. Very The End friendly with a KEXP edge and Zach was such a superstar. He's gotta be a Leo, with that gorgeous mane, the flowing confidence, the glowing superstar presence that helped launch these guys from local favs to national stars.

I'm certain Vendetta Red has a personal chiropractor that goes on tour with them. All of that stage thrashing warrants immediate medical attention.

I love how he pranced around up there — you can tell how genuinely he loves performing each and every song; he loves that his band has worked so hard to be able to perform it to a huge crowd of screaming fans as this.

Vendetta Red: this is the stuff legends are made of. Is it true they all quit their day jobs and lived in one apartment — or was it one tour van? — practicing and touring and writing endlessly, until they got signed to local indie-label Loveless Records and then got picked up by Epic Records for something like a jillion dollars in the biggest debut signing (monetarily speaking) ever?

Something like that. Tho I must confess a certain revoltion that Vendetta Red, Gloria Estefan, and the Allman Brothers are labelmates. In fact, yep, that rather makes me wanna hurl. Zach's distinctly primative scream, nearly unhuman in its fierce wails, like a cheetah or wildcat, right next to Gloria "Anything for You" Estefan. That's fucked up.

You and Zach sure do love the F-word.

Fuck yeah! And so does Gloria, I hear…