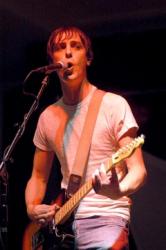 Where the Hell You Wanna Be?

This was my first Bumbershoot show as an authorized member of the somewhat sanctioned press and I was quite excited to reap the benefits of "working" the event in a press capacity at the Thermals show… which merely means that I hoped I would be able to skip that really long line to get in and be escorted to some secret door before the masses.

And it worked! With a couple of odd questions and innuendo'd answers, staff photographer Ryan Schierling and I made it past the militant door guy and into the venue in time for the sound check.

I was so excited… it has been so long since I'd seen them perform, and I felt like it was some sort of reunion. Would they have grown a couple inches or dress differently? I wasn't sure.

What I was sure of was that I was a bit hung over from the previous night's Buttrock Karaoke event {God Bless the TIG drink specials} and the empty high-school auditorium {aka the What's Next Stage, aka The Exhibition Hall} Thermals soundcheck performance was exactly what I needed to get in the proper enthusiastic mindset for a Bumbershoot day ahead.

So that's where you were! Char and I hadn't picked up our passes yet because we slept in too late after the Buttrock karaoke party — a total bummershoot — so took our place in the massively long line and got totally bumberfucked by the bumbernazis and their "only 10 at a time" entrance rituals. So, by the time we found our place in the auditorium (which was 50 minutes into the set), it was behind a pole in the back near the restrooms. It wasn't so bad. That is where the prom chaperones were supposed to be.

Don't even get me started about the stupid, stupid columns blocking my view of Hutch and Co., or the lavalamped-beer "garden" under the florescent lights with the bad bumberbooze problems. Bleh.

The hour-long set that the Bumbershoot folks required of the Thermals might have been a bit intimidating to this trio who have perfected all that is concise and lo-fi. What that meant for us was that we heard every single song they've ever recorded or plan to record — everything from their brilliant debut album More Parts Per Million, everything from the No Culture Icons ep, a cover song ("Astrozombies" by the Misfits) and, glory-be, some new Thermals songs (including that "This is how we go" song they debuted in Seattle a few months back).

Their rhythmic bass thumps and melodic distortion acted as medication to my foggy head… And their feedback and mid-song pregnant pauses felt religious. In my somewhat compromised hungover state, I could have been coaxed to believe anything.

And I noticed that drummer Jordon has more cymbals in his drum set than he has drums. Not incredibly metaphorical or anything, just an interesting factoid for Indie-Rock Trivia NightTM.