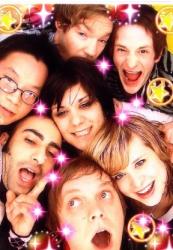 Noble or not, United State of Electronica was the only must-see band on my Bumbershoot schedule that were going to be a new discovery for me. I'd heard a ton about them from folks… each time the exclamations of "You've got to see them" and "I can't really describe them, they just rock" would be included in the conversation.

And how exciting to watch the show from a very prestigious spot in the back of the EMP… behind the sound guy. The EMP Sky Church security folks denied my entry via the press entrance under some secret ruling that one needed a BLUE badge to enter (I was a member of the green badge press core). By the time I was alerted of this, the venue had reached maximum capacity and my spot in the general admission line was not granted entry.

Not to be kept out of all the fun, I put that handy EMP membership of mine to good use. With my membership, I was able to enter the museum portion of the building and station myself behind the chain link fence by the guitar collage sculpture thing. Obviously, with such a choice vantage spot, I felt incredibly honored.

>From such a spot I was able to cock my head in such a way that I could see each member of the band that was on the most left two thirds of the stage as well as keep tabs of guys as they entered and exited the EMP men's bathroom.

But I was not distracted one bit! Their mix of a Jazzercise aerobic workout, the Partridge Family, the ambiance of Manchester's La Hacienda, a bit of Cornershop, and the most Charlie's Angels of halter-tops was infectious. I declare that their lova-dance potion can cross generations and bring together moms and uncles and ministers and pharmacists.

Songs like "Vamos A La Playa" and that "I've never had it so well" song made me curse the fact that I didn't have a glo-stick to twirl. As one USE band member announced, "This dance party has just started!" I quickly retorted with a girl-next-door-on-Springbreak "Wooot Woooot!"

As much as I love the insanely disco-pop-a-licious happiness of the ode to Seattle "Emerald City," my internal grammarian has been baffled with the refrain: "I never had it so well."

That phrase just sounds so bizarrely… strange to me. I've never had it so…. good? Oddly, I believe they may be the grammatically correct ones, what with "well" as an adverb and all — but still, it sounds so stilted to me. I find the line jarring. Is it considered acceptable these days to say, "I never had it so well" in casual electro-indie-pop conversation?

Well… perhaps they're referring to alcohol?

Ahh…. HAH! I get it! As in, I usually order an Absolut Mandrin and soda, but tonight I just asked for just a vodka soda, and got the Popov. What a difference.

I've never had it so well!

Or perhaps the song is an ode to grilling. You know — I usually order my steaks medium rare.

I've never had it so well!

They are using "well" to modify "had" which would mean that they are using it correctly… as an adverb modifying a verb. Another example of such a sentence formation is "I've never sang it so well."

But, can't "well" be modifying "it"? That would mean that it would be an adjective modifying a noun… which I think that means that it should be "good." Right?

So in that case it would be like saying "I've never had coffee so good." Awkward, yes… but not out of the realm of possibility as it is used in the USE sense.

No matter really. I'd go along with whatever they say.

With their blending of Vocoder male vocals, matchless guitar-pop mayhem, and sassy straightforward female dueling vocals, it sounded like riding in an electropop convertible with my best girlfriends, screaming the lyrics to our fav dance songs on an "we're-goin-on-til-past-the-break-o-dawn" party night. All that, and they sound like sweet gooey homemade confections, just about ready to come out of the oven…

Usually acts that exude such 1970's disco, hands-in-the-air vibes intimidate me into a corner. Whenever I find myself caught in such an environment, I do everything possible to avoid eye contact with the dance floor or any resident thereof.

But with USE… the lights, the festive-fresh mantra lyrics, the 196-member band dancing all over the stage… I found it the most inviting of devil-may-care atmospheres in all of Bumbershoot.

Who knows, at their next show I might even sport a tank top for the third time in my life. Wooot Woooot!