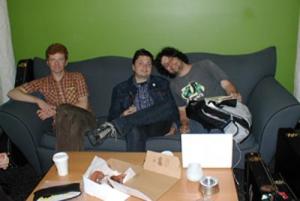 Coffee Specs:
Blaine: I hate anyplace that over-roasts their beans. My beverage of choice is Seattle’s Best hazelnut lattes. {igLiz note: I feel it only fair to point out that Blaine patronizes SBC’s that are outside of Seattle.}
Carl: I drink girlie coffees. I’m embarrassed to grab them when the barista announces their completion, drinks like a Starbucks decaf vanilla almond latte. {igLiz note: Again, a Starbucks that is outside Seattle}.

The funny tour story anecdote:
Blaine: We were stuck in traffic in the middle of nowhere during a hail storm. Kurt said ‘Hey Blaine, I’ll give you 20 bucks to run to that tree and back.’
Kurt: Yeah, and he did it! When he got back into the van and demanded his 20 bucks, we started making excuses like, ‘you didn’t run the WHOLE way.’ He staged a temper tantrum and cleared the Scrabble board game we were playing, pounded his fists on the table and screamed ‘Give me my fucking money!!’ It’s funny, the things we do to amuse ourselves.

Discussion: What are your thoughts on being in a “superband”?
Carl: The press has been eager to label us as a superband, but I don’t consider us one. This is the only band I’ve been in for five years. If you think about it, every band comes from other bands, so any band could be described as a superband.

Necessary Karaoke Survey: How do you feel about karaoke?
Blaine: I don’t sing karaoke. Carl is the karaoker in the bunch. I just watch. When we were at a restaurant in New York City, he did “Take On Me” and he totally worked the crowd. The mic was wireless and he walked all through the bar, looking people in the eye as he walked about.