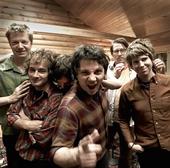 Jeff Tweedy has had more heartbreak than Elizabeth Taylor. His voice sounded exhausted but surprisingly hopeful and when layered with the clatter filled sampled effects it created a haunting performance that will be relived every time I listen to their most recent album "Yankee Hotel Foxtrot". During the opening song, Jeff's fragile voice instantly calmed me. He was soothing, lulling, consoling, and beckoned me to curl up with my favorite teddy bear and think about how everything was all right. But the backing band made me tap my foot and the eerie sampling added made me uneasy. It was a horribly beautiful conflict. I was calm, happy and boucing up and down but at times uncomfortable. With each song, Wilco consistently showed the crowd that damage is beautiful {or at least damage makes beautiful music}. They simultaneously broke my heart and made me smile.

It's evident {even without reading all of the press} that Wilco is concerned with making songs that are records of an event or feeling as opposed to capturing pop culture's immature ear. It's refreshing to watch a nationally known band perform live and realize that they own 100 percent of the songs they are playing. They must be doing well financially, they had more guitars on standby then they had songs. {Ok, I'm exaggerating a little bit.}

While trying to deconstruct their sound into a convenient "sounds like" category, I realized they don't sound like anyone. It's amazing that a band can utilize so many styles {country, rock, pop, folk} and yet every one of their songs is so recognizably Wilco.

Listening to their set was like watching a story unfold; a story where the theme to every chapter was "she broke my heart". But I couldn't stop reading and after I finished the final chapter, I was salivating to read the sequel.

Somebody hand me a napkin please.