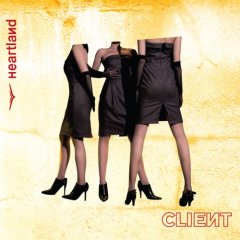 Do you remember electroclash?

It was popular in the early years of this decade and placed emphasis on hipster style and electronic pop music. Some of it was pretty great but it seemed like nearly anyone with a synthesizer or drum machine was in a band at the time. Or, less condescendingly, Wikipedia describes it as “a style of fashion, music, and attitude that fuses New Wave, punk, and electronic dance music with somewhat campy and absurdist post-industrial detachment in addition to vampy and/or camp sexuality. The movement combines the 1980s electropop/New Wave/Italo disco sound by means of synthesizers and drum machines.”

Client, a three-piece electro pop/punk band from London, are kind of electroclash. They are also kind of like Kraftwerk. Image is of the highest importance to Client, while trying mightily to distance itself from any emotion. The ladies in the trio are Kate Holmes, Sarah Blackwood and Emily Mann; yet for the purposes of the band they are Clients A, B and E. For live shows, they dress identically as flight attendants. The cover of this album is striking: it shows them in tight dresses with long, slender legs and stillettos with heels so sharp they could be considered a deadly weapon, but they are only shown only from the neck down and with a perfectly straight line lopping off their heads. It says, “go ahead and lust after our bodies; you still don’t have a snowball’s chance in hell of taking us home.” It is very post-feminist as they are in complete control of their sexuality. Unlike Kraftwerk, whose ideal world would be where they could send robots to tour in their place, Client needs to tour so that they could manipulate the sexual tension of the room they’re playing in.

This album, Heartland – Client’s third (and first with Client E) – continues on in the same vein. “6 in the Morning” begins with the refrain “you look good on your knees, you know it’s time to please.” Yet for the all the hyper-sexual pretense (and programmed beats), stripped down it sounds like a 60s girl-group song with the a catchy chorus and lush backing harmonies.

Overall, the record is a very good pop album. There is not a single song that doesn’t work or isn’t very well constructed. The ladies of Client know their way around a catchy song as well as anyone making pop music right now. Take “Xerox Machine” for example. It is a cover of an Adam and the Ants song and and covered to great effect. It really does work and it is probably the most rocking song on the LP. Cover songs are always both safe choices (a great song has already been written) and risky ones (comparisons are inevitable), but Client’s version stands on its own as a great song.

“Lights Go Out,” is another catchy pop single. Like “6 in the Morning,” the sex is overt, but in this song it reveals a vulnerability that Client is not wont to doing very often. “You said you want to set my sould free, but I’m just an object of your fantasy.” Not only is it smart and perceptive but it is also an upbeat song you can dance to. Even if the lyrics say something different.

My favorite track, however, is “Where’s the Rock and Roll Gone?” Sure, it may have been crafted just to differentiate Client from many of the forgotten electroclash bands, but it is well-crafted, fun, upbeat and catchy. It’s also an anthem that raises a valid question. It is dominated by the chorus, but listen to (or, I guess, in this case, read) one of the verses: “all your idols dead and gone; still deny there’s something wrong; watch your soul seek rebellion; is this what you call depravity?” It was once said that if you stripped away the rough power chords (and slowed them down a bit) and lyrics about sniffing glue from the Ramones songs, you’re left with a pop band like the Beach Boys. The same could be said of Client. Remove the electronic beats and overt sex and a 1960s girl group is left standing – albeit one that writes its own songs.

Heartland has 12 tracks and zero bad ones. It is a consistently good record from beginning to end full of good-to-great pop songs. Really, who can ask for anything more this summer?