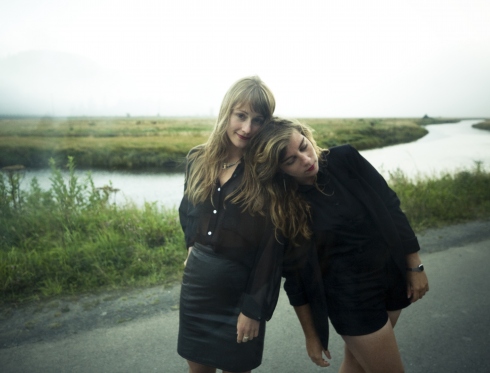 Let's jump right in: I'm torn between starting this post with "this Lemolo album is seriously haunting me" and "Lemolo could totally beat up your favorite synth-y indie dream-core band" because they're both true. In the case of the former, I find myself humming harmonies absentmindedly at varying points in my days and nights, wondering what the song is — and then realizing it's a track off of The Kaleidoscope; and the case of the latter, the lyrics are smarter and more gripping than anything I've heard in this genre before, and the emotion-pendulum they swing on is more vast.

Whichever way you slice it, The Kaleidoscope is a keeper. It'll be your new go-to for warming up, coming down, pondering, soundtracking, arriving, leaving, making out, and everything in-between. The album as a whole is intelligent and tight, meandering over to casually shred your face off in one moment and placing it's hands directly on your heartstrings the next. There's such a big-yet-right-in-the-next-room feeling that pervades from start to finish, and it would be easy to make comparisons like 'Beach House with a better edge!' or 'Phantogram with less dance party and more smart-kid!' but we'd be doing Lemolo an injustice by saying so. Instead, I'll fine-tune it a bit and say that this album holds up to the landscape of Washed Out's "Feel It All Around" {one of my favorite dream-jam tracks} and the brilliance of a portion of the Broken Social Scene catalog {"Sweetest Kill" and "Anthems for a Seventeen Year Old Girl come to mind}, while still standing apart with a tone and center all it's own.

Every single song has a piece in it somewhere that punches us square in the gut, in the very best of ways. "On Again, Off Again" is the big single from the album, and of course there's the "Open Air" video… it's great to finally hear tracks from shows put to waxdisc, like those two, "Who Loves" and "Whale Song" — but "Move Me" is taking the proverbial cake at the moment. "Move Me" wraps the listener around the axle with the line that repeats I don't / want to / be away / from you / too long, and coincidentally enough, that's exactly how we feel about this album (and this band in general, PS).  I'd strongly encourage every single one of you reading this to be sure and catch Lemolo at Columbia City Theater this Friday and Saturday, but both shows are sold out. You'll just have to get yourself over to the Capitol Hill Block Party for a chance at taking in a live set. 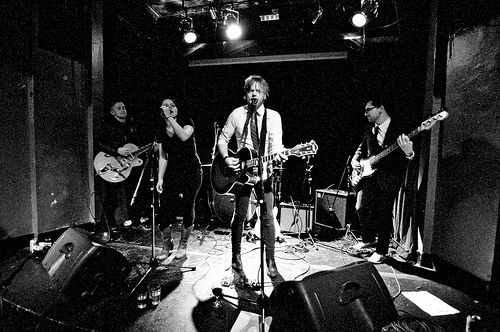 While the Lemolo release and this next one have nothing to do with each other, they both hit my stratosphere in the same week, and so I've taken them in at the same time — and as a result, there has definitely had a yin-and-yang effect taking place. When I'm all full-up on Lemolo's smart soundscape-y vibes, I shift my attention to my other favorite thing of the moment, the equally smart yet sonically-opposite Foreign Spells {the new Young Evils EP}. Foriegn Spells is short, to the point, and provides an excellent sampler-pack of songs that show the direction the band is headed in. While we've made no secret here in the imaginary office about how much we loves us some Enchanted Chapel, we're double-down excited about the new tunes that the Young Evils have seen fit to bestow us with, especially now that we've got "Darker Blue Bayou" in the flesh and can add it to the next mix we make. With the last release as evidence to compare and contrast against, the songs seem smarter, darker, fuller, and more concise — the EP really shows the listener the difference between a bright idea and more of a fully-formed realization of what these stellar musicians are capable of. And while Foreign Spells is totally killer on the stereo, as is the case with many other bands, we think these lady-and-gents do their best work live — so be sure to get yourself to the formal release party at Barboza next month, on July 13th.

There have been a handful of tracks that are making their way onto mixes of late, and a few doing repeat duty, so I thought it best to mention them as well if we're talking about what's been filling our imaginary ears and iPhones with happiness. Some are new-new, some are new-to-me, and some are just new in that they were buried at the bottom of the stack and recently found their way back up into heavy rotation. On the actual new front, outside of Lemolo and the Young Evils, I'm still stuck on Yellow Ostrich's The Mistress {technically still new, as of 2011}. At first, I thought "Whale" was the end-all be-all for these guys, but it turns out that the whole album is a grower — and a shower! Along with "Whale" there's tracks like "Mary" and "You're Gonna Hate Me Soon", both most-excellent mix starters and enders that I find myself listening to over and over again, deconstructing and reassembling the songs as I follow along. There's also the obvious releases that, surprise surprise, seem to have some staying power right out of the gate: namely Boys & Girls by the Alabama Shakes, Fear Fun by Father John Misty, and last year's No Time For Dreaming by Charles Bradley. Ooh, and I can't forget about "Blood Red Sentimental Blues" off of Cotton Jones's 2011 release, Paranoid Cocoon. (I'm sensing a trend here leaning towards a rootsy-vibe for summer, to counteract all that synth-love. Can you say Pickathon, anyone?)

Anya Marina's "Heart Stops" is great, albeit impossibly simple, and catchy in a way I can't quite explain; and Deerhunter's "Desire Lines", Cloud Control's "My Fear Number One" and Jonathan Wilson's "Can We Really Party Today" are showing up on most of the mixes I've made lately too. And yes, Damien Jurado's Maraqopa is still unstoppable, in case you were wondering — I find myself returning to "Working Titles" over and over again, like it's my job some days. On the older-but-ressurected side for recent mix-making fresheners: "Speak For Me" / Cat Power, "Here It Comes" / Doves, "Delicious" / Catherine Wheel, "Ana Ng" / They Might Be Giants, "Walking On A Dream" / Empire of the Sun, "Feel It All Around" / Washed Out, and as per usual with me, endless Rogue Wave {maily Descended Like Vultures tracks}, Frames, and Wrens are all making my hurry-up-and-get-here-summer playlists.

Whether you're already hip to these tracks or just discovering them for the first time, I hope they make your ears, heart, and summertime as happy and full as they've made mine of late! I'm pretty new to the world of Spotify, but if you want to go and sample a couple of these songs I've talked about {on the condition that you will purchase the albums if you're really into the songs, natch} you can pop on over here {and here} and check them out. I've listed everything alphabetically by artist for ease of use.