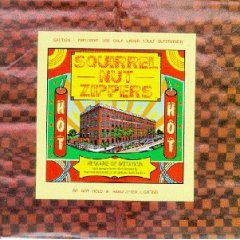 This song was huge. H-U-G-E. It was my freshman year of college and the Squirrel Nut Zippers were inescapable. Which wasn't such a bad thing. I still get excited hearing this song — it has so many exquisite moments, so much quirky character, that it's no wonder the band could never replicate its success. Don't get me wrong, Hot was a great album (and probably one of my most worn out CDs of 1997), but "Hell" was the clear winner of the brief swing revival that happened around 1997 (rivaled only perhaps by The Reverend Horton Heat's "It's Martini Time").

Don't remember this song? I find that hard to believe, but ok, let's refresh: It begins with strummy guitars for four measures, then the horns kick in. Keys are layered in there, played staccato in pairs, and the drums lay a jazzy swing beat. The lead vocal is sung in an almost gypsy-jazz-punk style (eat your heart out, Gogol Bordello), with a chorus of background voices chiming in in a lazy speak-sing kind of style that reminds me a bit of the old SNL sketches with Tarzan, Tonto and Frankenstein's Monster singing Christmas songs.

The climactic moment that would get everyone singing along was the final verse:

"Now the d and the a and the m
And the n and the a
And the t and the i-o-n
Lose your face, lose your name
Then get fitted for a suit of flame"

Listening to this song 11 years later makes me wonder what ever happened to my freshman year roommates, and puts me back in that Chicago dorm room playing Yoshi's Island on Nintendo and sitting on a futon mattress on the floor because we couldn't afford furniture. Ah, college, how I don't miss thee.