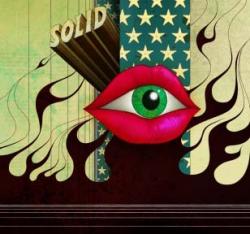 This CD sounds like the kind of LP that you found in your big sister's room when she was out scoring with her boyfriend, an older biker who probably turned her on to the band in the first place (and it's what they listen to as they trip and "git it on" before he goes back to King County on a parole violation).

Thee Emergency begin their second full-length release with seemingly random percussion burbling up into a drum solo, the kind you hear on buckets on the street corners of the city you first run away to, in the drafty apartment you're crashing in for the night. It's forming the introduction to "Call 911," singer Z.D. Vox's frantic edge of an erotic panic attack. This ecstatic energy is a fairly normal phenomenon for a rock song (not necessarily as carnal and vulnerable in this decade though), but the three plates of groove spinning beneath this continent-size opener are bracing. It's the love shack death proof groove, and Vox seems desperate to hold a relationship together long enough to "get a piece": "Please don't forget how I turn you on / don't tell me last night was my imagination." But maybe it was.

This is the follow up to 2006's Can You Dig It? {review}, which was produced by punk-soul legend Jim Diamond. Expectations of the band's ability to put together a sequel as deep by themselves have easily been met. Solid is a plush red velvet cave of Dr. Sound's Fender Rhodes woven by fingers that sound as if they grew up jamming along to Tex-Mex psych classics. Thee Emergency apparently had no emergencies handling the head-recording duties themselves this time, as its 58 or so minutes feel like three pure hours on windowpeak with the most sophisticated and animalistic local musicians you know. The band (probably coordinated by versatile guitarist/etc. Matt "Sonic" Smith) is as ferally attractive as Jon Smith's Zap Comix-cum-MC5 cover art. The frizz-pop licks of "Attack of the Cobrasaurus" captures the mood quickly, for example, before the chaos of the SW psych-grind sets in. "Everything is on my mind all the time, all the time," Vox urgently sings, and it is there that the story behind the album begins. Within the time frame of these over-a-dozen new songs something happens, the sequence is arranged purposefully.

Solid is about The Want, the longing that begins in the loins that mixes with the juices of the struggling existence and that eventually deforms the soul over time. At one point Vox screams, "Could I make you happy?" in the background of the mix, as if trying to poke through the gauze. Soon the record gets for the most part slower and darker and I don't want to give away the ending. Meanwhile, "2069 Space Time" sounds like the burner they left off a soundtrack to a vintage overdose drama. "Small / dark / black / Gonna give myself a heart attack." "This Guitar Says I Love You" sounds like the sweetly melodic six string instrumentals on Jefferson Airplane's Surrealistic Pillow, which means the band is aware how heavy shit gets here.

"O. Mota" is one of my favorites, which flies just below full-on space rock (about a goddess, ghod, drug, thought, whatever, never mind), smacked immediately on the dope earner by the propulsive proto-punker "It's All In The Reflexes," a rage against inner demons that takes the time for a ragga-ska break and some sax squeals (thanks again, Dr. Sound). For a psychedelic album, the whole thing isn't very guitar-based, relying just as much on Vox's yearning, Gospel-enriched voice as, say, the Who meets Fairport Convention twists of "Tom Seger and the Psychedelic Freakout."

So it's all an obvious Dharma Bummer, right? Well, most don't take it this far is the point; right to the end. The spoken word rants about numbers, percentages, indifferences, whatever, never mind, very nicely captures the next day dummyheadedness of a torqued afternoon just as entropy is fully declared. The band probably knows that the best song here is probably the penultimate "The Word," a miasmatic musical version of "The Book of Revelations," and when the mental lava runs out, you might remember that friend of yours that ended up in a cult after walking stoned into the shopping mall. Or was that you?