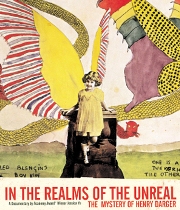 Henry Darger "In the Realms of the Unreal"

The biography of a reclusive and undiscovered artist by the name of Henry Darger who lived from 1892-1972 and died a hermit in a small Chicago apartment. Although most thought of him as the unsociable janitor who attended Mass daily, it wasn't discovered until after his death that amidst several hundred Pepto-Bismol bottles, old newspapers and magazines that he had authored an unpublished 12-volume story composed of 19,000 legal-sized pages with single-spaced typing entitled "The Story of the Vivian Girls, in what is Known as the Realms of the Unreal, of the Glandeco-Angelinian War Storm, Caused by the Child Slave Rebellion." In addition to the massive volumes of writing, Darger had also illustrated several hundred watercolor paintings telling this story that he had obsessed over for most of his life.

The story recounts a war of adults vs. children, the enslavement and murder of children, and the ultimate victorious rebellion of children against the adults. Adding to the child-centered focus of the story was Darger's source material for most of his illustrations; being tracings and clippings from vintage advertisements, comic strips and newspaper clippings, assembled together into breathtaking collages, painted over with vibrant watercolors. Although Darger never considered himself an "illustrator," his knack for skillful draftsmanship is remarkable.

Even more peculiar is Darger's view of male/female sexuality – he illustrated the majority of the female children in his story as nude with male genitalia. This sexual confusion exhibited has been called "controversial" and "perverse" by many, but it is arguable that Darger, being ignorant of having had any sexual experiences in his life, was simply not aware of the physical differences between males and females.

This documentary film, In the Realms of the Unreal, is "Not Rated" and contains no explicit language or scenes, although artwork depicting the lynching and strangulation of nude hermaphrodite children may be offensive to some.