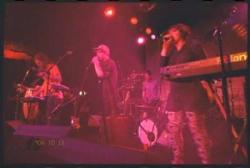 I used to consider The Showbox a rather sizable venue. In its day, this venue has showcased greats ranging over the eras from Frank Sinatra to The Ramones to Pearl Jam — certainly nothing to scoff at. But then something marvelous happened: our friends at 90.3 KEXP promoted and hosted a group of three eclectic independent bands good enough to sell out two consecutive nights at this historic building. Which, of course, makes me wonder… is even the pond of our beloved Showbox big enough for such fish as these?

The fish of whom I speak are Clap Your Hands Say Yeah, Architecture in Helsinki, and Takka Takka. While still seemingly regarded among the general concert-going population in terms of "I've heard of them," they have nevertheless managed to garner admirable followings everywhere they have gone, gathering crowds of quirky, unusual people with their quirky, unusual music. I was among one such crowd for their all-ages show last Tuesday, the first of their two performances at The Showbox.

Takka Takka, the first band up, are like an amalgamation of CYHSY and AIH — with the bass turned up. They ooze with a resolution that serves the greater sound. At times they were perhaps too dedicated to the music as a whole, and some of those songs just begged for something to stand out and drive the music around in a completely unexpected U-turn, but it was by most means an enjoyable listen. Their songs have a lo-fi pop/punk sensibility vaguely reminiscent of early Pixies, and like the Pixies, they never appear to take themselves overly seriously. They have nothing against getting onstage in a sweater and a pair of jeans and letting the music speak for itself.

Next to the stage were Architecture in Helsinki, a band from Australia which I won't even bother to attempt to categorize under any terminological umbrella less broad than the generic "indie" or "experimental." Accompanied by drums, drum machines, bongos, maracas, and drumsticks galore, everything about their performance was second to upbeat "1! 2! 3! 4!" rhythms and hip-hop beats, and I was often left forgetting that there were actually any other instruments onstage. This provided for a nice "music festival" feel in which the audience could just clap their hands and shake their heads without having to think too much. This simple, fun design of the songs is misleading, however – for if you can somehow get through the slurred Australian dialect of the live performance, you can sometimes catch the glint of a delightfully witty and heartfelt lyric. These guys are plain fun — nothing more, nothing less, and no artificial additives.

After a rousing anticipatory welcome from the crowd that consisted of plenty of claps and yeahs and puns intended, Clap Your Hands Say Yeah took the stage. They are masters at creating a beautifully intricate backdrop of sound through which Alec Ounsworth's gritty, cracking voice can come crashing. Some of their songs have an early- to mid-nineties grunge feel to them, like what I'd expect Smashing Pumpkins to sound like if they had grown up in an indie world. During some of their especially crowd-pleasing numbers, such as “The Skin of My Yellow Country Teeth” and “Upon This Tidal Wave of Young Blood,” the crowd was jumping up and down so zealously that the large stacks of speakers on either side of the stage wobbled to and fro with disconcerting vigor, causing the lights atop to project their light onto the walls, audience, and ceiling with a rhythmic up-and-down bounce. Near the end of the set, as if to perfectly cap the night as Architecture in Helsinki joined Clap Your Hands Say Yeah in an exhilarating percussive performance of "Satan Said Dance." I couldn't have written it better myself.