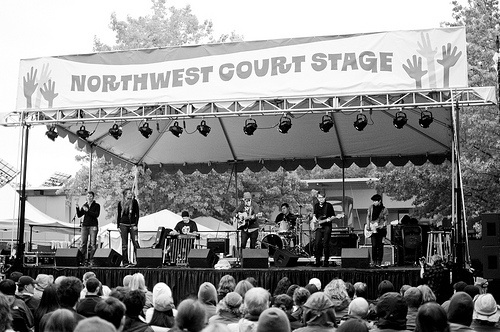 Undoubtedly, like us, you’re all stoked about the coming onslaught of summer festivals — and with the Capitol Hill Block Party right around the corner, we thought it would be a good time to hip you to what we can’t wait to see from the rest of the fests. Sasquatch! is already under our belts, and that means Doe Bay, Bumbershoot, Austin City Limits, FYF Fest, Musicfest Northwest, CMJ, and Iceland Airwaves are all comin’ round the mountain.

Well, hot damn. This is a lot of music to take in, and we sure are equal parts stoked and grateful to be living it up in the grand ol’ Pacific Northwest (and beyond). Let’s get right down to it, in chronological order:

The where and when: Orcas Island, August 11th – 14th {SOLD OUT}
Feels like: hippie goodness in a gorgeous setting, without the hippie bullshit. May contain campfire sing-a-longs, but only the good kind.

There’s something to be said for a festival that sells out before the lineup is announced, yet still manages to stay true to it’s oh-so-grassy roots — and Doe Bay is that festival. For almost four full days on picturesque Orcas Island (that’s here in Washington for you out-of-area readers), lucky attendees will be taking in the likes of The Head and the Heart, John Vanderslice, Damien Jurado, Cobirds Unite, Pickwick, Sallie Ford and the Sound Outside, Frank Fairfield, Lemolo, Matt Bishop, and a dozen more. Camping encouraged, pants optional.

A point of note: if you didn’t get tickets for DBF, you can mosey on out to Seattle Center for the Seattle Tattoo Expo. The buzz of the guns, the art openings, a weekend full of music at venues around town and a taste of this vibrant community are just a few of the things you can expect. And at only $15 / day, it’s a super-affordable way to get your ink on. Information and advance ticketing on the Expo website here.

The where and when: Labor Day Weekend, Seattle Center {tickets and information}
You have to go, because: it’s a local festival put on by good folks with great bands. Also, it’s down the street from your house.

Ray Lamontagne. The Presidents. Mavis {Fucking} Staples. Broken Social Scene. Hall and Oates. Warpaint. Kaylee Cole. Sharon Van Etten. Sallie Ford and the Sound Outside. Lemolo. That’s about one-tenth of the performers you can see at this year’s Bumbershoot, along with more comedy, spoken word performances, and theater-y things than you can shake a stick at. Throw in Bumbershoot After Dark (a pairing with Decibel Festival) to keep the party going strong Saturday and Sunday nights, and all the other cool stuff the ‘shoot brings to the table — and you’ve got a recipe for awesome.

Not in the PNW? Head to LA for FYF Fest and party with the likes of Death From Above 1979, Guided By Voices, The Dead Milkmen, The Head and the Heart, Japandroids, and more.

The what / where / when: 48 hours after Bumbershoot, September 7th – 11th in Portland. {tickets and information}
Feels like: Mini SXSW, Pacific Northwest style — minus the hype.

As soon as you get a good night’s rest from Bumbershoot, pack light and hop the train down to Portland for Musicfest Northwest. MFNW really is like a smaller scale South by Southwest, with a tighter presence and little to no hype factor. This year, PDX proper will be taken over at every venue in town by bands like Band of Horses, Iron and Wine, Blind Pilot, Sebadoh, Rhett Miller, Big Freedia, Dan Mangan, Sallie Ford and the Sound Outside, The Moondoggies, Viva Voce, Alela Diane, BOAT, Dolorean, Anais Mitchell, Y La Bamba, Drew Grow & the Pastors’ Wives, The Globes, and what seems like a hundred more. The bands (and the people putting on the fest) speak for themselves — every which way you look, it’s all around goodness. Get there.

The what / where / when: September 16th – 18th, on the lush greens of Zilker Park in Austin, Texas {tickets and information}
Feels like: Bumbershoot on 11.

Take Bumbershoot, jack it full of steroids, and pour it into a giant park where the lawns go as far as the eye can see and the temperature stays above 80 around the clock. Another sell-out-before-the-lineup-is-announced type, ACL is boasting this year’s best three days: Stevie {HOT DAMN} Wonder. Arcade Fire. Kanye West. My Morning Jacket. Fleet Foxes. Elbow {!!!!!!!!!!}. Gillian Welch. The Walkmen. Hayes Carll, Brandi Carlile, The Head and the Heart, Aloe Blacc, The Moondoggies, The Cave Singers, Yellow Ostrich, Telekinesis, We Are Augustines {!!!!!} — we could go on and on and on. Three day passes are sold out, but there’s still onesies available… and ps, round-trip tickets from Seattle are stupidly inexpensive. We’ll be reporting live from Austin this year — you should join us!

If you’ve still got energy left after planning all that, make sure Iceland Airwaves and CMJ are on your radar — we’ll be stageside at the latter helping out our friends at KEXP and bringing the imaginary party to the east coast come October. We’ll see you at the shows!

{Photo of Chris Pureka at Bumbershoot courtesy of Victoria VanBruinisse.}