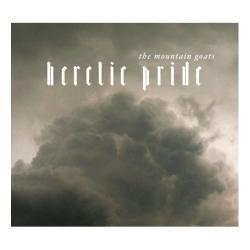 Any discussion of an album by The Mountain Goats begins, with good reason, with John Darnielle's lyrics. The songwriter and leader of this group has, through 10+ years of releases, starting with his lo-fi cassettes releases and moving through to his most recent work Heretic Pride, proven himself to be a masterful wordsmith. Through one simple song, Darnielle is able to evoke the pathos of two young men who dream of fame and fortune through their metal band, cut right to the heart of a horrible break up and take the listener deep within his own troubled relationship with his abusive stepfather.

Darnielle's latest album is no exception, filled with sparkling imagery, wit, emotion and some of the leanest writing this side of Raymond Carver. Unlike the last three Mountain Goats releases, the focus is not on Darnielle's life, with his all-seeing eye pointed towards ficitional characters and the lives of iconic figures like H.P. Lovecraft and Prince Far I.

What made previous albums like The Sunset Tree and Get Lonely so memorable was the visceral feelings that so many of the songs on them brought to bear, making them feel alive and sentient. As great as the songs are on Heretic, you can feel the remove. The barrier between Darnielle and his characters is palpable, which makes those moments where there is a connection that much more striking.

For example, on the heartbreakingly beautiful "San Bernandino", Darnielle sings of a young couple, settling into a hotel room so that the woman can give birth to their child. In certain parts of the song, you can hear a slight catch to Darnielle's voice, as if the story was haunting him in some way. It makes for a much more powerful experience than can be found on songs like the title track and "Tianchi Lake", the subject matter of both being quite obviously fictional.

This is only a minor infraction on Darnielle's part, as he still fills every one of his songs with some amazing, indelible images, as well as his unholy knack for a timeless melody. Just because you can't find a way to relate to some of the songs doesn't mean you can't still sing along.