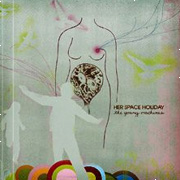 I'm breaking the rules for Her Space Holiday because I adore this album. I'm crossing over into the forbidden land of album reviews just to let you all know to stop searching for your favorite new CD. I did all the work for you and here it is: The Young Machines. This isn't some honeymoon period I'm having with this album, either. We've been together almost all of 2004 and I appreciate it on an entirely different level now that we've had more time to get to know each other. It is true that when I first heard the album, I couldn't keep my hands off of it. It's also true that when it first touched my eardrum, I told myself I had to spend everyday with this album. But I did what any seasoned music listener does; I told myself I was caught up in the newness and excitement and I forced myself to distance myself from it so as not to over-listen. As much as I tried to hide it from my friends, I heard myself saying {yes, out loud} "No seriously, this album is different. We really have a special connection. Wait until you two meet and you'll understand." I even went so far as to bring my headphones and CD player to a bar on a Friday night and made my drinking companion listen to the first three tracks before I would attempt to have a normal conversation with her. She now owns the album.

The title track and introduction to the album is sexy in its innocence. It's lyric-less smoothness slides into your ears like hot motor oil and blackens your brain. It begins with a simple xylophone melodious rhythm that slowly thickens with electronic accompaniment and when it ends with the same bare innocent xylophone lullaby, you realize you've stopped breathing.

Track two introduces lyrics into the electronic atmosphere laid out by the intro track. As much as I loved the first track, I was slightly relieved to hear words. That's when I realized Marc Bianchi {who single-handedly creates the glow that is Her Space Holiday} is my new object of green hatred. Not only can he get the full attention of his listeners with a 4:24 minute wordless intro, but he can also write original lyrics worth reading in the liner notes such as, "suck on my fingertips until you kill all my prints, so your boyfriend has no clue of how much I've been touching you." Zow!

You're hooked by the third track. You might as well admit it right now: you're in love. There's no turning back. This Postal Service-esque band with Elliott Smith style double-tracked vocals has stolen your heart {though note that Her Space Holiday has been around longer than the Postal Service}. This single man that borderline talks rather than sings has taken you away from all the other albums you used to love and requires your full attention. Even when you try to go back to your other albums, you find yourself thinking of HSH.

I'm going to warn you right now: "Sleepy California" may require some hankies. I don't recommend listening to this track if you're just dropped your mother or grandmother off at the airport unless you're prepared to drive through a cloudy welling of your own tears.

"My Girlfriends Boyfriend" is my current favorite track on the album, with its electronic backbeats overlaid with classical stringed instruments. With a temporary breakdown of distorted chaotic madness interjected into the song, Her Space Holiday keep things unpredictable. Because we all know predictability can make a relationship stale.

My only regret: I wish the album had a better ending. I feel as if the last track didn't bookend the album as strongly as I would have liked. But then again, it's rare for the strongest passions to end well.

If you're hesitant to buy this latest Her Space Holiday release because feel you were burned the last time, buy it anyway. That's a direct order. The Young Machines is Her Space Holidays strongest and most moving album to date… or to marry. It's still too early in our relationship to tell.