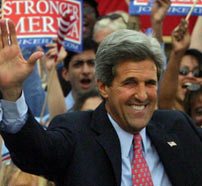 {Otherwise know as: some highlights from John Kerry's acceptance speech to the Democratic National Committee…}

"We have it in our power to change the world again. But only if we're true to our ideals — and that starts by telling the truth to the American people. That is my first pledge to you tonight. As President, I will restore trust and credibility to the White House."

"I will be a commander in chief who will never mislead us into war. I will have a Vice President who will not conduct secret meetings with polluters to rewrite our environmental laws. I will have a Secretary of Defense who will listen to the best advice of our military leaders. And I will appoint an Attorney General who actually upholds the Constitution of the United States."

"I am proud that after September 11th all our people rallied to President Bush's call for unity to meet the danger. There were no Democrats. There were no Republicans. There were only Americans. How we wish it had stayed that way."

"And on my first day in office, I will send a message to every man and woman in our armed forces: You will never be asked to fight a war without a plan to win the peace."

"As President, I will fight a smarter, more effective war on terror. We will deploy every tool in our arsenal: our economic as well as our military might; our principles as well as our firepower."

"Strength is more than tough words."

"The 9-11 Commission has given us a path to follow, endorsed by Democrats, Republicans, and the 9-11 families. As President, I will not evade or equivocate; I will immediately implement the recommendations of that commission. We shouldn't be letting ninety-five percent of container ships come into our ports without ever being physically inspected. We shouldn't be leaving our nuclear and chemical plants without enough protection. And we shouldn't be opening firehouses in Baghdad and closing them down in the United States of America."

"And tonight, we have an important message for those who question the patriotism of Americans who offer a better direction for our country. Before wrapping themselves in the flag and shutting their eyes and ears to the truth, they should remember what America is really all about. They should remember the great idea of freedom for which so many have given their lives. Our purpose now is to reclaim democracy itself."

"You don't value families by kicking kids out of after school programs and taking cops off our streets, so that Enron can get another tax break."

"You don't value families by denying real prescription drug coverage to seniors, so big drug companies can get another windfall."

"What does it mean when Deborah Kromins from Philadelphia, Pennsylvania works and saves all her life only to find out that her pension has disappeared into thin air — and the executive who looted it has bailed out on a golden parachute?"

"When I was a prosecutor, I met young kids who were in trouble, abandoned by adults. And as President, I am determined that we stop being a nation content to spend $50,000 a year to keep a young person in prison for the rest of their life — when we could invest $10,000 to give them Head Start, Early Start, Smart Start, the best possible start in life."

"And when I'm President, America will stop being the only advanced nation in the world which fails to understand that health care is not a privilege for the wealthy, the connected, and the elected — it is a right for all Americans."

"I want an America that relies on its own ingenuity and innovation — not the Saudi royal family."

"I want to address these next words directly to President George W. Bush: In the weeks ahead, let's be optimists, not just opponents. Let's build unity in the American family, not angry division. Let's honor this nation's diversity; let's respect one another; and let's never misuse for political purposes the most precious document in American history, the Constitution of the United States."

"I don't want to claim that God is on our side. As Abraham Lincoln told us, I want to pray humbly that we are on God's side. And whatever our faith, one belief should bind us all: The measure of our character is our willingness to give of ourselves for others and for our country."