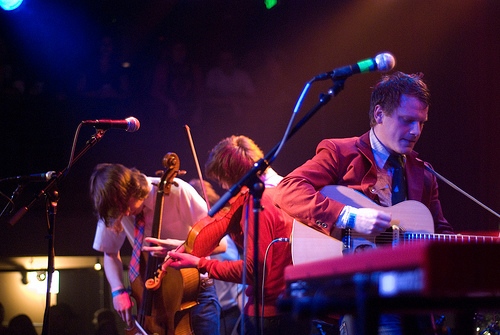 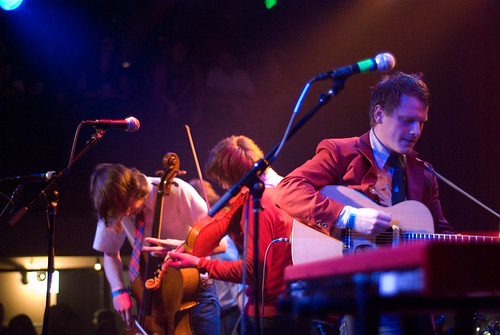 I am a latecomer to the mesmerizing travelogues and swirling epiphanies of Hey Marseilles’ musical majesties. Wayfarers to the bone, lead singer and guitar player Matthew Bishop, along with players Nick Ward, Samuel Anderson, Philip Kobernik, Jacob Anderson, Patrick Bannon, and Colin Richey crafted their DIY release To Trunks & Travels out of accordions, violas, cellos, trumpets, “and so forth” before getting the hell out of Seattle and touring like they’re no good for shore.

Now that Onto Entertainment will be giving the astonishingly assured Martin Feveyear mixed-and-mastered debut a rightful reissue in late June for the rest of the world, the band also unveils its vinyl version on Friday, May 21 for an all ages show at the Vera Project (with Sea Fever opening), and a regular booze-available following night at the Tractor (with The Head and the Heart opening).

I have seen Hey Marseilles live several times, but since spinning the thirteen track To Trunks & Travels for weeks now since being assigned this preview, I feel like I never really knew the band. Don’t get me wrong, they were assured and awe-striking live, especially at last year’s Block Party, where they did all kinds of things to their “regular” sound. But allowing these really well written lyrics about “sipping saline and lemonade” and “reading the manual on slow decay” and letting the clap-happy jangle of the brisk “Rio” dominate my music-appreciation moments as much as the sweepy, weepy “From A Terrace,” I’ve been truly pulled in. This isn’t just a Colin Meloy appreciation band, they’re both too smooth and more spiritual and not as weird as he is; there is shanty and klezmer here, but it’s much less angry or deeply mournful. Just as literary, just much more luminous. Don’t think The Decemberists would ever try to pull off the Sunday evening bourbon lounge deck jazz-blues of “Goodbye Versailles” either. No wonder KEXP, Bumbershoot, CMJ, and others joined the Block Party in endorsing them. Could it use a bit more humor? A couple more songs like “Rio.” Sure. But this is a wonderful way to begin their way in the world, again.

Now that I’ve absorbed all these great tunes and memorized the words, I want to see them both nights so I can start singing along with everyone else too. Before they hit the road again and we don’t see them for awhile. And to get a slice of that sweet, sweet vinyl.

{Go back in time and read our review of the first edition back in January, 2009.}