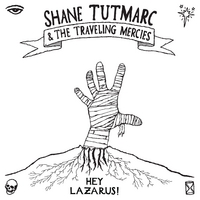 Shane Tutmarc comes from a very musical family, one that I would be eager to write a graphic novel about for its decade-spanning trend of genre-innovation. Usually when critics are considering the work of an artist, they tend to treat their work as if it's created in a vacuum, and don’t factor in the nature and nurture behind the inspiration. But Bud Tutmarc brought Hawaiian guitar playing into Western Washington, pioneering in much the same way Tutmarc reinvigorated the Seattle power-pop love song at the turn of the century. These things just tend to be carried over generations.

It’s those two elements of love and genre-innovation that are what Tutmarc is all about. When he fronted the band Dolour he was one of my favorite songwriters about romance, never omitting the delightful details of a failing relationship or its battles with temptations, and the dark side of a powerful sensual connection. Over the next few releases Tutmarc experimented with homemade production, slick sounding Spectorish waves of gleam over dark oceans of doubt. A couple of barely-released records from the past couple of years showed the still very young man struggling to find the right musical voice for his thoughts (but not failing to drop song gems along the journey).

Shane Tutmarc & The Traveling Mercies is a family band on the roots-deep Hey, Lazarus! and it kind of sounds like a slightly updated version of the kind of family gospel-pop records you find in thrift stores. Songs with dazzling performances by gigging filial troupes who could easily flit between early rock, jazz, and all kinds of radio pop stylings. Featuring siblings Ryan, Brandon, and Paula on a variety of instruments, and Shane playing a whole bunch of instruments himself — in songs like the swinging “Front Door’s Open” and the devotional “Honey I Choose You” — the album calls back to another time, to the barely told story of rock and roll, the story of late-night garage composing and performing.

Like Elvis Costello still loving his father Ross MacManus so much and playing out with him, with Tutmarc, the joy is found not in ‘rebellion’ but in the sweet transcendence of the connections we have, through blood and play. The great wordplay is still here about haunts making us feel haunted; the poetry is still easily on tap. The album has an occasional heavy religious side which might confuse people not versed in the roots genre, and Tutmarc’s voice isn’t quite as assured singing about green grass and summertime as it once sang about stolen kisses and other people’s drugs, but a few plays helps it settle right on in. Just like getting to know a new friend who seems very familiar, Hey Lazarus! is very cozy.