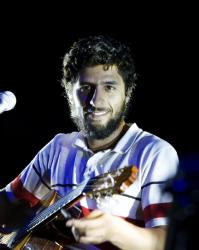 Jose Gonzalez at the Museum of Fine Arts

{Ahoy there, Imaginary Ash here. When ace photographer Ion Sokhos asked me if he could cover Jose Gonzalez for TIG, I was all, hells yeah! He brought along his friend Braden Miller, who wrote the following review. Props to Ion and Braden for their excellent contributions, and we hope to hear/see more from them!}

While washing away my sorrows in some bar in the MFA (Jose Gonzalez's performances had been moved from the beautiful and intimate Calder Courtyard inside to the larger Remis Auditorium because there was a chance of rain), I overheard a fellow patron remark how the wailing of a nearby baby was similar to the vocalizations being made by the opening act Twi the Humble Feather. Though their set was well underway at this point, I felt no compulsion to abandon my beer and enter the auditorium; I could sit where I was and hear a baby cry, why move?

Later when my beer was done and curiosity had gotten the better of me, I ventured into the now very crowded and very dark auditorium. My seat, of course, was in the very center of a dimly lit row, so after much bumbling and stepping on of toes I finally sat down. I sort of giggled to myself as I settled in and drank in the scene. Twi? The Feather? What do you call this band for short? It hardly rolls off the tongue. Band names can be such a funny thing; so infrequently do they have any relation to actual music, but on occasion a band's name can sour me before I've even heard note one, and this was the case with Twi… or maybe it was hearing that they sounded like a crying baby. Either way, the stars were aligned for me to not like this band.

The next song started off with two of the musicians layering simple riffs, with the third then adding some harmonics to the mix. Hmm, so far so good, I thought, this sounds nice enough. The three musicians then began to build the emotion and complexity of the music through the addition of more layers, but here they began to use their voices in addition to their guitars to create a rich, textured sound. Unfortunately for me

this was their last song, but what I heard I thought was very interesting, and I was curious to hear more, enough so that after the show I shelled out $15 for their album, Music for Spaceships and Forests… um, ok. Their music, from what little I had heard, seemed to me that it would lend itself very well to a studio setting, perhaps more so than a live performance. I noticed later on in the evening that the album clocked in at a whopping 25 minutes for 5 tracks. Though I've yet to listen, I can't shake the feeling that $15 was too much.

People cheered, while remaining in their seats, at the close of 'the Feather's' set, though I'm not sure if it was in celebration of their music or their departure from the stage; everyone was clearly there to see Jose and quite politely tolerated the wait.

During the break between the acts I was surprised to notice number of small machines circled around the three stools that remained on stage. Wait, three stools, so it won't just be Jose solo, interesting. After seeing little mirrors whir and tilt on the half dozen or machines I realized that there was also going to be a light show of sorts accompanying Jose. Also very interesting. A nod from the road manager to the sound man signaled Jose's arrival to the auditorium, and the crowd erupted as he took to the stage.

I'm not sure that I've heard as loud as crowd in the Remis before but as soon as Jose sat down the place fell completely silent. Shortly after his first notes the lights kicked in, creating a deep inky blackness

behind and around Jose, while he was lit from the side and underneath is a deep red. The interplay of light and shadow in accompaniment with Jose's gorgeous music was wonderful, and kept the crowd enraptured throughout the set. The large Jose shaped shadows that were periodically projected on the wall made Jose seem larger than life and fit perfectly with his warm sound that so completely filled the auditorium. Jose's economical movements belie the power and feeling of his music and at times it seemed as if there was much more sound that just one man could produce. He did have help producing sounds on a few numbers, as two musicians would join him in various combinations on various types of percussive instruments, and even on a keyboard that produced string like sounds as well as filling in w almost a white noise here and there. The additional musicians added greatly to the over all sound, even though their playing was sparse; their knowing when not to play was as important as their knowing when to play.

While initially I was disappointed by the Museum's decision to move the concert indoors in retrospect I think it was beneficial to the performance. The closed environment was acoustically superior and there was no outside city noise interfering w the performance (gone was the potential for a siren in the distance or rumble of a commuter train), while the complete darkness allowed the lighting to become more dramatic and therefore more effective. The crowd all had the benefit of a comfortable seat and so was able to more fully dedicate its attentions to the music at hand. When standing outside on a warm summer night it's easy to become distracted, but this was not the case, the crowd was so locked in to the performance it was palpable, and I think the show was better for it.

Jose now and then broke the heavy silence between songs by occasionally just saying a simple 'hello'. As he left the stage after a 3-song encore he got and incredible and much deserved standing ovation. The show was amazing, and certainly one of the best performances I've seen in recent months. There were no gimmicks here, just wonderful music, a humble artist, and one very appreciative crowd. It was a special thing to have been a part of.