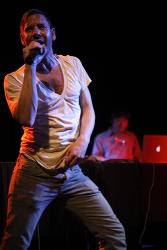 Hey Willpower, I love you but you’re bringing me down.

Hey Willpower is “the band” in The Hair the TV the Baby and the Band, my favorite album of 2007. The title of that album is to explain why there were five years in between Imperial Teen records. Hey Willpower is comprised of two guys: Tussle’s Tomo Yasuda and Imperial Teenager Will Schwartz. It’s an electro dance pop duo that celebrates the hooks and beats of Top 40 pop and R&B, except overtly gay and on a smaller budget. It’s a really fun band to listen to and quite easy to love right away. It's about instant and immediate gratification. As an unrepentant lover of radio-friendly pop and indie rock aesthetics, this is the band closest to my ideology.

When the band found its way to Nectar on Wednesday night, they were the opening act for MEN, a mashup DJ duo of Johanna Fateman and JD Samson from Le Tigre. Before Hey Willpower were two local DJs, Mathmatix and LA Kendall. It was a dance party, to be sure – and a gender/sexuality-neutral one at that. The night was sponsored by Hot Mess and sold t-shirts with slogans like “Racism is so gay” and “This party sucks… dick.”

I got to Nectar shortly after 9 pm, not realizing it would be an hour and half before the band I was there to cover would finally take the stage. Yet, Mathmatix and Kendall kept bodies moving and asses shaking throughout most of the night. I think I’m in the minority, as a person who loves dance music without knowing how to dance myself. But the tracks Mathmatix and Kendall played helped quickly pass the time before Hey Willpower began playing. The posted schedule said they would be on at 10:30, but it turned out to be closer to 10:50. On a work night (where my alarm clock goes off at 4:30 the next morning), my patience for that shit is usually pretty thin, but in that twenty minutes I heard the DJs spin “Lip Gloss” by Lil Mama and “Ice Cream” by New Young Pony Club – two songs in quite-heavy rotation on my iPod, which helped quickly pass the time and all was forgiven.

So finally, at 10:50 pm, Schwartz and Tomo began playing to a generous-for-a-late-Wednesday crowd at Nectar (with probably between two-thirds and three-quarters full) and immediately jumped in to “Double Fantasy II," my favorite song from their new album, PDA. The setup was with Schwartz singing and dancing while Tomo programmed his MacBook to get the beats. The set was really fun, but finishing up after only 30 minutes and six songs, was quite a bit shorter than I was expecting/hoping for.

Still, that doesn’t mean that I didn’t enjoy it while it lasted. I lip-synched to every word of “Double Fantasy II” and especially loved hearing “Magic Window” live; it’s the best Justin Timberlake song he never made. It should go without saying, but I mean that as a compliment. Each song was fun to hear and got nearly everyone dancing (aside from the awkward dude with the notepad trying to take notes, it was pretty much unanimous). It was just that the thirty minutes flew by and seemed over before it was done.

I stuck around for a bit after Hey Willpower to see what MEN (on a not-entirely-irrelevant tangent, one of my favorite lyrics in a Le Tigre song is when Sampson rhymes in "Nanny Nanny Boo Boo", “we’re like boys, just ask her, dicks done by C.P. Caster”) would begin their set with. Not too shockingly, it was “It’s Raining Men." I became conscious of the time and realized my alarm clock will buzz whether I liked it or not and found my way back home after that.

Hey Willpower’s set was a respectable length for an opening band and I had a good time and all that, but, well, you understand, I’m sure.