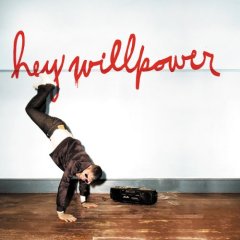 I first heard about Hey Willpower two and a half years ago, when their "Double Fantasy II" video made its way to my inbox. I had just started working for a music magazine, and they were on the cover of one of my very first issues, so I got myself familiar with them quick. I fell in love with the song, the video, and the band — which features Imperial Teen's Will Schwartz on vocals and Tussle's Tomo Yasuda on electronica. At that time, they had toured with Le Tigre and were getting decent press, mostly focused on their live shows which featured Schwartz on vocals and dance moves (with two background dancers) while Yasuda worked a laptop.

The duo recorded a track with then-It indie-pop girl Annie (the gem "Chewing Gum"), and then seemingly vanished. They had a couple of songs on their MySpace player (including "Hundredaire," for which a single was at some point released), but they sort of just seemed to go the way of the dodo. I never heard another thing about them, and then Imperial Teen regrouped and released a new album last year and I figured Hey Willpower was as good as dead.

How delightful then to find that they are in fact very much alive, and that they've finally released P.D.A. here in the US. The album, which it turns out was released in Europe a couple years back, never got released here — who knows why. So to many who know the Hey Willpower story better than I do, this will be nothing more than a re-release with one new song (a cover of Architecture In Helsinki's "Heart It Races"), but to others who missed them the first time around, I present to you Hey Willpower. Take the sounds of Justin Timberlake, add cooler beats and cheekier lyrics, and throw in volumes of hipster cred, and you might arrive at something like this.

In fact, those are the two most notable components of Hey Willpower's sound: The tongue-in-cheek lyrics ("I am ok with playing truth or dare / as long as you end up in your underwear"), and the space-age beats and sounds. When these two things come together they make for a hell of a good time. The album begins with "Double Fantasy II," a fine introduction to what's in store. It is immediately infectious. See the video below for proof.

"Uh-Uh-Uh," another pop gem, follows: "Everybody get on the floor / everybody wanna uh-uh-uh." The album splits time between such dancey, crunky rhythms ("Hundredaire," "Magic Window," "In the Basement") and R&B flavored vibes ("Retail Heaven," "Silent Ring," "Not Trippin'"). The styles overlap plenty, making for a fluid and enjoyable listening experience.

Schwartz masters the art of breathy, upper range pop star vocals with Hey Willpower, a fun departure from his Imperial Teen indie rocker role. It's not better or worse, just different; if you come to P.D.A. with Imperial Teen expectations, you'll be quite surprised. Think of it as a foray into crunk/pop. If you were unfamiliar with Imperial Teen coming in, you'd alternately be surprised upon hearing them after becoming familiar with Schwartz through Hey Willpower. With this project, he proves himself quite a versatile and clever entertainer.