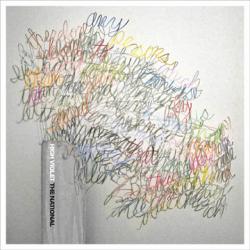 (The National plays with Okkervil River at the Concerts at the Marymoor in Redmond, WA on September 11, 2010.)

I’m a latecomer to The National, the band that somehow sounds like a son of L. Cohen fronting a farm of Radiohead fans with both acoustic instruments and electronic gizmos. I first heard them on the quite excellent Live At KEXP Volume Four benefit compilation with the short, simmering “Start A War.” Considering that smorgasbord also had Vampire Weekend’s must-replay-frequently “A-Punk” and Sharon Jones’ “Let Them Knock,” the fact it was my favorite song on there was pretty impressive. Well, OK, to me, anyways.

High Violet is actually my first National full-length, and so whether or not I’m “truly qualified” to review it (feel free to take pot shots, completist trolls) is debatable. But I can admit that I am hooked pretty hard on this stuff, Matt Berninger’s peet-starchy baritone more like the vocals of a particularly gifted poet pal than a rock star. That’s good, because the lyrics are pretty fucking awesome a lot of the time, or at least they fit my life “Like A Velvet Glove Cast In Iron.” The album’s apex is the fourth track “Little Faith,” the title of which promises the diary of a dimly lit wick, but the actual panoramic  images of “Pretty girls sucked into the sky,” and how the narrator “Burned down the field just to see what it kills,” Blitzkriegs the melancholy bunker in your mind as massively as anything since OK Computer.

As cinematic as it is personal (half-meant for a bitter-minded gal named Anna who haunts the singer, the way we live vicariously in thought through anyone we love, no matter how messed up the situation), “Little Faith” uses a driven-into-your-mind vocal melody with a dumb little jungle/drum and bass rhythm and some cheap-ass guitar loops to construct an awesome monument to loss and abandonment in the city. It is easily my favorite song so far this year. And considering those loops are also fetching in the resentful, resistant “Anyone’s Ghost” (with its 80s style electronic drum beating through its breaking heart) just before it, and the agoraphobic, anxiety-ridden imagery of “Afraid of Everyone” right after, this is probably the best middle-of-a-full-length you’ll hear in 2010, period. There are other sweet and lighter (“Bloodbuzz Ohio”) and sour and darker (“Sorrow”) moments on High Violet, but what a peak.

The National are from Cincinnati, Ohio (where they started at the end of the last century) and remind me a lot of that city’s favorite son Harvey Pekar, the beloved, grumpy underground comics genius who just passed away. Pekar was extremely literate, writing Chekov and Carver-level stories about the ups and downs (mostly downs) of his personal life, mixing them with grander epics about political destruction and change, and could scribe masterful assessments of jazz records for the music press. Berninger sounds like the worrying, sometimes caustic, always crystal clear Pekar, whether worrying over the trivial in the shadow of doom or finding momentary bliss in the description of his own desolation. High Violet is an album absolutely brimming with life, no matter how grim, maddening, or morbid. It’s highly recommended, but don’t forget to bring your meds.